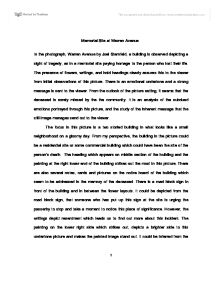 Memorial Site at Warren Avenue In the photograph, Warren Avenue by Joel Sternfeld, a building is observed depicting a sight of tragedy, as in a memorial site paying homage to the person who lost their life. The presence of flowers, writings, and bold headings clearly assures this to the viewer from initial observations of this picture. There is an emotional undertone and a strong message is sent to the viewer. From the outlook of the picture setting, it seems that the deceased is sorely missed by the the community. It is an analysis of the subdued emotions portrayed through this picture, and the study of the inherent message that the still image manages send out to the viewer. The focus in this picture is a two storied building in what looks like a small neighborhood on a gloomy day. From my perspective, the building in the picture could be a residential site or some commercial building which could have been the site of the person's death. The heading which appears on middle section of the building and the painting at the right lower end of the building strikes out the most in this picture. ...read more.

For anyone viewing this picture or for any passerby, the painting would draw attention to this site urging to know more about the significance of this place. Since the picture comes across as a mourning site, it could be inferred that the person was a public figure or just somebody who lost their life in an unfortunate incident. There is an interesting bold heading on the building saying, "When you take someones life you forfeit your own". From my understanding of this, there was someone directly responsible for the loss of this person and is or was still at large after the tragic incident. This statement is probably someone's grief, reminding of the consequences of bad deeds to the person responsible for the loss. There are also a few handprints after the end of this heading, it could be that more than one person contributed to project this heading. Besides the bold heading there are couple of side notes on the left side of the building which informs about certain events. There is one that says, " Guilty Aug 23 1993" and the other which seems to be a continuation of the first writing says, "Life in Prison Oct 12, 199". ...read more.

From the freshness of the flowers on the edge of the sidewalk, it could be said that people are still visiting this site on an almost daily basis. As far as the compositional strategy of Sternfeld is concerned, the landscape clearly contains deep meaning in fact this picture in question has emotional depth to it, and also clues leading us to a conclusion of outcome of the tragedy. It could be observed that how the photographs seems to be covering the little area on the left side of the building which has the writings indicating the outcome, as in the guilty verdict and jail time for the convict, but cropping the area on the right which seems to not have much significance. The point of view of Sternfeld in this photograph is a clear representation of beauty and harmony in an increasingly uniform, technological and disturbing America which he set forth to achieve in his book, and clearly has achieved it. There is beauty depicted in form of peace as a subdued message in the bright and vivid image. Harmony is depicted by featuring the memorial setting of the site, and disturbance in terms of loss of life in an unfortunate incident. ?? ?? ?? ?? 2 1 ...read more.