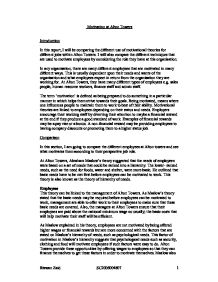 Motivation at Alton Towers Introduction In this report, I will be comparing the different use of motivational theories for different jobs within Alton Towers. I will also compare the different techniques that are used to motivate employees by considering the role they have at this organisation. In any organisation, there are many different employees that are motivated in many different ways. This is usually dependant upon their needs and wants of the organisation and what employees expect in return from the organisation they are working for. At Alton Towers, they have many different types of employees e.g. sales people, human resource workers, finance staff and admin staff. The term 'motivation' is defined as being prepared to do something in a particular manner in which helps them strive towards their goals. Being motivated, means where one influences people to maintain them to work to best of their ability. Motivational theories are linked to employees depending on their status and needs. Employers encourage their working staff by diverting their attention to maybe a financial reward at the end if they produce a good standard of work. Examples of financial rewards may be a pay rise or a bonus. A non-financial reward may be providing employees to having company discounts or promoting them to a higher status job. Comparison In this section, I am going to compare the different employees at Alton towers and see what motivates them according to their perspective job role. At Alton Towers, Abraham Maslow's theory suggested that the needs of employees were based on a set of needs that could be ranked into a hierarchy. The lower- ranked needs, such as the need for foods, water and shelter, were more basic. He outlined that basic needs have to be met first before employees can be motivated to work. This theory is also known as the theory of hierarchy of needs. Employees This theory can be linked to the management of Alton Towers. ...read more.

Also, if management take an interest in how they security are operating on a regular basis and taking an interest in their work, this can be linked to Mayo's theory. This is because he suggested that employees are not as motivated by pay as much but being able to be recognised for their hard work by management and that they are showing an interest in their workers to see if they are fully equipped. They can also be motivated by having a high standard of security products like more CCTV cameras around Alton Towers so that people would feel more safe in their work place and that their work will be more aware as having cameras at more angles will give them a more detail insight where potential trouble may be. It will also relieve them from running around and stressing when the extra cameras can show the employees exactly where to go if there was trouble. This can be linked to Hertzberg's hygiene theory because he suggested that safety around the work place will be a motivator and that employees will be more efficient when working under a safer wok place. It can also be linked to Maslow's theory as he suggested that safety and protection will motivate the employees to work better. As CCTV cameras are placed around Alton Towers, work is made easier as security can be told where to go in case of an emergency. This will help save time and the problem can be seen to immediately. Ride attendants The ride attendants at Alton Towers can be linked to Maslow's theory because they are the ones that are serving their customers on a constant basis. They must be fully trained on how to operate their rides fully and make sure that any technical issues are dealt with as soon as possible. If any machinery is unsuitable for the purpose of Alton Towers or can be dangerous to the public, they have to make sure that the problems is sorted and that members of management are informed. ...read more.

6) Alton Towers must ensure that their employees do not have any rifts between them as this can affect them as working as a team and may cause the employees to be more avoidant of each other. Any criticism or comments should be performance related and be able to back up their thoughts in a thorough manner, not suggested remarks that are pointed out employees personally. Concrete detail must be provided to back up their claim and be able to express on how the improvements can be made. This can help motivate staff at Alton Towers, as the employees may work more openly and freely and be able to work as a unit, rather than an individual. Being part of a group will allow an individual to perform to the standards of the other employees around them. This can be linked to either Mayo or Maslow's theories. Mayo suggested that employees by social needs and not money alone. However, if employees be involved in personal rifts between them, the sense of them socialising between will be endangered and would not be able to work at the standard that is required for them. This can be linked to Maslow's theory as he suggested that employees are motivated by the having job security and social aspects at Alton Towers. Employees will know that any rifts caused by other employees will danger themselves in retaining their jobs and can be concluded by receiving a bad reference. If any of the factors on Maslow's hierarchy will lead to employees being de-motivated to work. Conclusion In this report, I have found out the different motivation theories in which Alton Towers can use to help motivate their employees. I have found out ways that could benefit the organisation on a whole and how they can be used on the day to day basis. I have also found out that which motivating theories are linked to certain jobs that are available at Alton Towers and how they can use different techniques to help out their motivating factor towards their working employees. ?? ?? ?? ?? 1 Rizwan Zaid SC2006004807 ...read more.