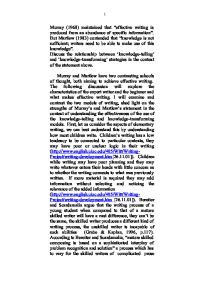 Murray (1968) maintained that &quot;effective writing is produced from an abundance of specific information&quot;. But Martlew (1983) contended that &quot;knowledge is not sufficient; writers need to be able to make use of this knowledge&quot;.

Murray (1968) maintained that "effective writing is produced from an abundance of specific information". But Martlew (1983) contended that "knowledge is not sufficient; writers need to be able to make use of this knowledge". Discuss the relationship between 'knowledge-telling' and 'knowledge-transforming' strategies in the context of the statement above. Murray and Martlew have two contrasting schools of thought, both aiming to achieve effective writing. The following discussion will explore the characteristics of the expert writer and the beginner and what makes effective writing. I will examine and contrast the two models of writing, shed light on the strengths of Murray's and Martlew's statement in the context of understanding the effectiveness of the use of the knowledge-telling and knowledge-transforming models. First, let us consider the aspects of elementary writing, we can best understand this by understanding how most children write. Children's writing has a low tendency to be connected to particular contexts, they may have poor or unclear logic in their writing (http://www.english.uiuc.edu/405/Witt/Writing-Project/writing-development.htm[26.11.01]). Children while writing may have poor planning and they may write whatever enters their heads with little concern as to whether the writing connects to what was previously written. If more material is required they may add information without selecting and noticing the relevance of the added information (http://www.english.uiuc.edu/405/Witt/Writing-Project/writing-development.htm [26.11.01]). Bereiter and Scardamalia argue that the writing process of a young student when compared to that of a mature skilled writer will have a vast difference, they can't be the same, the skilled writer produces a different kind of writing process, the unskilled writer is incapable of such abilities (Grabe & Kaplan, 1996, p.117). According to Bereiter and Scardamalia, "mature skilled composing is based on a sophisticated interplay of problem recognition and solution" a process which has to vary for the skilled writers of complicated prose than it is for children and not so skilled older writers (Grabe & Kaplan, 1996, p.118). ...read more.

They describe how advantages in knowledge, both content and discourse, may be used to prompt more well structured compositions by students and also by using a more sophisticated set of tests used towards content retrieved from memory, the more advanced students may use these tests to include appropriateness to topic and text function but also for criteria including clearness, plausibility and interest (Beard, 1993, p.169). My argument is that if the writer can achieve such success by the use of the knowledge-telling model this could suggest that this use of knowledge is sufficient for a "novice to write like an expert."(quotation from: Beard, 1993, p.170). Before this argument can be explained in its entirety, explanation of the knowledge-transforming model is required to assess its strengths and how it fits in with one of the statements between Murray and Martlew. Bereiter and Scardamalia have provided a more appropriate model to tackle with the more advanced writing demands which is the knowledge-transforming model. The structure and explanation of which is as follows: Information from the MENTAL REPRESENTATION OF ASSIGNMENTS (i.e. the mental understanding of the written task) leads directly to the PROBLEM ANALYSIS AND GOAL SETTING block. The information from here gets diverted into two separate blocks, the CONTENT PROBLEM SPACE, (which is interacting with the CONTENT KNOWLEDGE globe) here, this place sorts the problem out and the RHETORICAL PROBLEM SPACE which questions and identifies the problem (this is interacting with the DISCOURSE KNOWLEDGE globe). The two SPACES are transferring information to each other via the PROBLEM TRANSLATION compartments (as the settling of one problem may activate the other). As the problems get resolved they enter into the KNOWLEDGE-TELLING PROCESS compact box which produces the writing. As the writing is produced, it reveals sets of problems which must enter the PROBLEM ANALYSIS AND GOAL SETTING block to be solved, (Grabe & Kaplan, 1996, p.123) the cycle continues. ...read more.

It is the Wimbledon tennis final, both players must make sure that they have the best equipment. The rackets they use must be of the highest quality, well-strung and strong grips. If at this point one of the players uses a wooden racket believing that only his skills will decide the winning factor in this game, he will be deeply disappointed at the end of the match. Likewise if the experienced writer were to compete with another experience writer, the absence of his knowledge-transforming model will force greater demands on him while he used the knowledge telling model. I leave the debate open as to whether this writer can out-think his opponent and produce an exceptional quality of work with the use of this "inferior" model in a writing competition, I only refer to Bereiter and Scardamalia's point that it is sometimes difficult to distinguish between the results of the two processes (Beard, 1993, p.170). In this essay it was necessary to discuss the mechanism and structure of the two processes to be able to assess the strengths of the two processes. I have argued that if it is the use of knowledge, as outlined by Martlew, that is important then such use will prove effective for the application of any model if used effectively. I have also argued that an abundance of information such as the awareness of the mechanism of the knowledge- transforming model does not always produce effective writing. I have stressed that the writer's skill is more important than the method he uses. If two equally effective pieces of work have been made where one uses the knowledge-telling model and the other uses the knowledge-transforming model then there should be no prejudice towards the written work produced by the "inferior" model. The product is where the results lie not the method. I have attempted to use analogies where I found appropriate in the key debatable areas. I have also tried to portray both strengths and weaknesses in my argument but my overall conclusion is firm. Word Count: 3,347. ...read more.