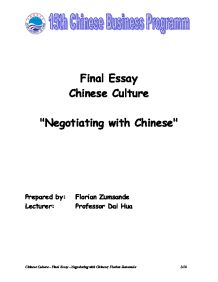 Final Essay Chinese Culture "Negotiating with Chinese" Prepared by: Florian Zumsande Lecturer: Professor Dai Hua Introduction When a company want to establish in China they have to follow some unwritten rules based on the cultural development China�s. You cannot come to China and doing business as you know it from Germany. That will not work. The chinese people will misunderstand you. In this assay I will give some informations about chinese negotiating methods and how western people can manage it, where they have to be careful. I chose this topic because in my opinion this is very important for doing business in China where you can see heavily the cultural differences between China and western countries. My assay will give information about this topic from the the first contact over the negotiation process to what may happen after the contract is signed. Getting in contact with Chinese companies Before you can negotiate with anyone you need to know with whom you can do business in China. There are different ways to get in contact with Chinese companies. - getting in contact with the "Au�enhandelsgesellschaft" in Shanghai - contact the responsible ministry - trade fairs/exhibitions - specific lectures, lecture travel to institutes/universities/ministries - private advice companies with seat in Hongkong - finding a chinese single person who have good contacts (guanxi) - advertise in magazines and newspapers - contact Chinese great companies of the same branch and try to get in direct contact with them or to get informations about other possible partners - contact an other german company who already established their business in china and asking them to work as a contact person to china - asking the german embassy in china - speak to homebank, consolidated companies, chamber of industry and commerce These different ways to get into china are in a way ranked as how important or effectful they are in my opinion. ...read more.

Managerial Implications As a foreign company or as an foreign expert it is very important in negotiations to know things like Chinas priorities, who these people are (cultural aspect). As an expatriate you should also be very patient. And it is important to know about Chinese thinking about the price. Priority Driven by "China fever" and the belief that China needs foreign technologies, Western business people rushed into the Chinese market with various advanced technological solutions. Many succeeded but many others failed. An important reason for the failure is that the PRC condition has not been paid sufficient attention: Chinese government is the "biggest boss" and all State-owned-enterprises do business according to the government's priorities, policies and plans. Foreign firms should above all, be sensitive to the guiding principles of China's social and economic development set forth by the Chinese Communist Party and the Chinese government, and also, should make a careful study of the Chinese government's priorities and implementation policies. These policies are often stated in five-year plans and official plans for different provinces and sectors and the WTO commitment. Priorities of China are available in some Western statistics. The priorities are also important indicators of what the Chinese want to spend their foreign exchange on. Therefore, it is vitally important for a Western firm to determine whether its project comes into the priority project category or not. If the project is included in the Chinese priority categories, it will interest the Chinese side and negotiations will proceed relatively quickly; if not, there may be problems in everything. Energy, transportation and telecommunications are among the traditional Chinese priorities. Recently, revitalizing China's deficit-ridden state-owned enterprises is also added to the list of Chinese priorities. Before priorities become public knowledge, foreign firms may still be able to glimpse much of the picture. For example, this can be done by establishing good relationships with the counterpart (Chinese negotiators) ...read more.

Of course most german business man know about the importance to match with the Chinese tradition but the face mostly stay as an inscrutable expression. With loosing the face equal at which side of business partners you must have in your mind that this could be the end of all negotiations. I heard about some expatriates who didn�t made much about holding the face they worked as they do in their country. In some cases this works. The Chinese partner learned to handle the western behaviour. So as you see it can also work in the other way round that the Chinese partner handle with the behaviour of the western partner. Conclusion My conclusion is that negotiating with Chinese is not as worse as it in my assay sometimes seems to be. If you know and understand the cultural differences as a western person it is not easy but you will make good negotiations because in my opinion it is naive to think that chinese people do not know what your values are. They know as much as you know about them so they know that you manage the things in your country in another way round. So if you make a mistake I am sure chinese people will "forgive" (if it is not a part of the negotiating tactic to bring you in embarrassments with your mistakes). Very important maybe most important in my opinion is the face because this is also very important for the chinese. Do not lose ones face. That is for a chinese people often not really forgiveable. The worst case what may happen if you let a chinese negotiating partner lose his face is that the negotiating process finish immediately. So this in my opinion one of the most important thing western people have to take care of in the negotiating process. Last I want to say that it was very interesting to work on this assay because I got a further inside view through chinese negotiating and with this the chinese culture. Chinese Culture - Final Essay - Negotiating with Chinese; Florian Zumsande 1/10 ...read more.