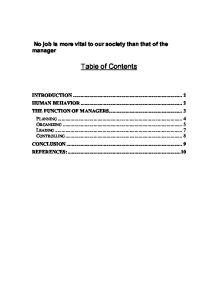 No job is more vital to our society than that of the manager Table of Contents INTRODUCTION 2 HUMAN BEHAVIOR 2 THE FUNCTION OF MANAGERS 3 PLANNING 4 ORGANIZING 5 LEADING 7 CONTROLLING 8 CONCLUSION 9 REFERENCES: 10 Introduction "No job is more vital to our society than that of the manager" Henry Mintzberg The word manger has just about as many interpretations as there are managers, so does the word society. The scope of this discussion could be as wide as the interpretations and so; twice endless. This paper, however, seeks to establish two factors it sees as main components of the quote; (1) that the role of manager is one implicit of manmade groups and (2) that the function of a manager is vital for progress and therefor society. Human behavior Looking at various known forms of societies, we generally find examples of some of its members having more power than others. Researchers, tracing as far back in history as they possibly can, have found status hierarchies in groups of people (Robbins, Bergman, Stagg & Coulter, 2001, p. 523). In the Tiv society in Nigeria Maurice Godelier found that "it is a structure [..] of graded familial priorities in the control of ...read more.

that "the bulk of the time, work, attention and money first goes to "problems" rather than opportunities". The CEO of Airfreight Express (AFX), in London, Philip Bowels, had to wrestle with problems concerning the repairs and maintenance of his planes when he found that the work performed on his planes was not satisfactory. The sloppy work posed a very real threat not only to his company, but to human life as planes with faults have a tendency to crash (Time Magazine p.56, August 13, 2001). It is not very likely that his plans for the company included sloppy work by the maintenance company. His plans had to be changed to deal with the problem, post haste. Organizing The way a problem is handled is usually decided by the nature of the problem, but the way a company identifies and responds to trouble is often determined by the its structure. In a group of people plans should be understood fully by everyone to be fulfilled to the planners contentment (Bartol et al. 1998, p. 367). Similarly problems arising in the course of putting the plans to life, will be identified earlier when there are more people with enough information to identify them (Ibid.). ...read more.

Taking the resent bankruptcy of the US' power company Enron into account. The internal pressure to make profits became so big that it became the only criteria for success in the minds of its employees. The employees and managers subsequently started to hide loss and boost revenue with creative book-keeping. The discrepancies became so large that when the actual results surfaced they were enough to make one of the biggest companies in the USA go bankrupt, literally, overnight. Conclusion Man needs to assume certain roles to function together. Realization, within the group, that some people are more important to them than others, gives rise to positions of power, or rather, positions of power to manage. As far back as our researchers can research, man has worked in groups, therefor the position of managers must have been present. The fact that managers have been around for a long time is, however, not enough to imply that it is the most important job of our society. What managers actually have done in all that time they have been around, is getting closer to establishing their importance. To do so the paper has taken Fayol's universal principals and showed that even the individual components of management, has had an impact on peoples way of life and thought. ...read more.