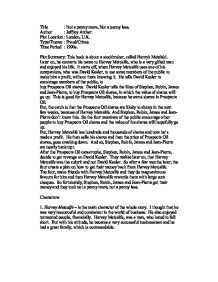 Not a penny more, Not a penny less by Jeffrey Archer, a plot summary.

So fortunately, Stephen, Robin, James and Jean-Pierre got their money and they took not a penny more, not a penny less. Characters: 1. Harvey Metcalfe - is the main character of the whole story. I thought that he was very resourceful and combatant in the world of business. He also enjoyed tormented people, financially. Harvey Metcalfe, was a man, who hated to fall short. But with his attitude, he became a very successful businessman and he had a great family, which is commendable. 2. Stephen - is a man, who was very poignant and had studied very hard. He was successful at high school, college and university. The only setback about Stephen, is that he fell for Harvey Metcalfe's trap, which was to buy "promising" Prospecta Oil shares. But, he was the brain of the whole group, on how to get their money back from Harvey Metcalfe and it was a successful idea too. ...read more.

What did you enjoy most about the book? I enjoyed the detail in main, exciting points and most of the book was pretty clear to understand. I also liked the characters' attitudes, because they were so real to London life. I thought that the vocabulary was spread out in many forms and ways. What did you enjoy least about it? I thought that there were too many numbers involved in simple happenings with shares and I thought that the chapters were too small. Write a short review of the book. Include a creative headline for the review. Headline: "JEFFREY ARCHER'S BOOK, RELEASES THE TRICKS OF THE TRADE." Jeffrey Archer releases the tricks of the trade, in this book called, "Not a penny more, Not a penny less." It situated in central London and it shows how easy, somebody can get used and made bankrupt. It shows the brains of the business world a business world and the not so good brains of the business world. If you want real fraud and real bankruptcy, then read this shocking, but a clever masterpiece. ...read more.