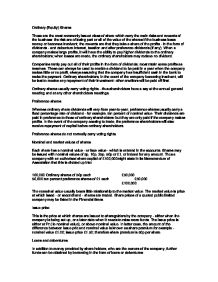 Ordinary (Equity) Shares These are the most commonly issued class of share which carry the main risks and rewards of the business: the risk are of losing part or all of the value of the shares if the business loses money or becomes insolvent; the rewards are that they take a share of the profits - in the form of dividends - and debenture interest, taxation and after preference dividends (if any). When a company makes large profits, it will have the ability to pay higher dividends to the ordinary shareholders; when losses are made, the ordinary shareholders may recieve no dividend. Companies rarely pay out all of their profits in the form of dividends; most retain some profits as reserves. ...read more.

Their dividends are paid in preference to those of ordinary shareholders: but they are only paid if the company makes profits. In the event of the company ceasing to trade, the preference shareholders will also receive repayment of capital before ordinary shareholders. Preference shares do not normally carry voting rights. Nominal and market values of shares Each share has a nominal value - or face value - which is entered in the accounts. Shares may be issued with nominal values of 5p, 10p, 25p, 50p or �1, or indeed for any amount. Thus a company with an authorised share capital of �100,000might state in its Memorandum of Association that this is divided up into: 100,000 Ordinary shares of 50p each �50,000 50,000 ten percent preference shares of �1 each �50,000 �100,000 The nomainal value usually bears little relationship to the market value. ...read more.

The issue price is either at Pr ( ie nominal value), or above nominal value. In latter case, the amount of the difference between issue pric and nominal value is known as share premium for example - nominal value �1.00; issue price �1.50; therefore share premium is 50p per share. Loans and debentures. In addition to money provided by share holders, who are the owners of the company, further funds can be obtained by borrowing in the form of loans or debentures: Loans are monies borrowed by companies from lenders - such as banks - on a medium or long-term basis. Generally repayments are made throughtout the period of the loan, but can often be tailored to suit the needs of the borrower. Invariably lenders require security for loans so that, if the loan is not repaid, the lender has an asset - such as property - that can be sold. ...read more.