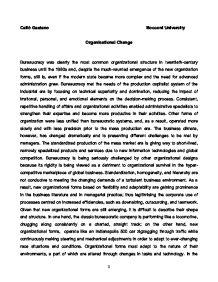 Cali� Gaetano Bocconi University Organisational Change Bureaucracy was clearly the most common organizational structure in twentieth-century business until the 1980s and, despite the much-vaunted emergence of the new organization forms, still is, even if the modern state became more complex and the need for advanced administration grew. Bureaucracy met the needs of the production capitalist system of the industrial era by focusing on technical superiority and domination, reducing the impact of irrational, personal, and emotional elements on the decision-making process. Consistent, repetitive handling of affairs and organizational activities enabled administrative specialists to strengthen their expertise and become more productive in their activities. Other forms of organization were less unified than bureaucratic systems, and, as a result, operated more slowly and with less precision prior to the mass production era. The business climate, however, has changed dramatically and is presenting different challenges to be met by managers. The standardized production of the mass market era is giving way to short-lived, narrowly specialized products and services due to new information technologies and global competition. Bureaucracy is being seriously challenged by other organizational designs because its rigidity is being viewed as a detriment to organizational survival in the hyper-competitive marketplace of global business. Standardization, homogeneity, and hierarchy are not conducive to meeting the changing demands of a turbulent business environment. As a result, new organizational forms based on flexibility and adaptability are gaining prominence in the business literature and in managerial practice; thus legitimising the corporate use of processes centred on increased efficiencies, such as downsizing, outsourcing, and teamwork. ...read more.

Automobile manufacturing had previously demanded that employees individually assemble an entire car and it took 514 minutes. With the introduction of specialized tasks, uniform parts, and the moving assembly line, Ford was able to reduce each assembler's task to a 1.5 minute cycle time. In fact, modern capitalism became to be known by many as "Fordism, a word that connotes the marriage of mass production based on well-paid jobs on the assembly line and mass consumption of affordable, standardized products" (Barnett and Cavanaugh, 1994). Immense changes have occurred in the market since Henry Ford's period of maverick automobile production. Today's business climate is evolving from one that follows long-term strategic planning to one that advocates war-like manoeuvring based on hyper-competition. The organizational species most likely to survive in this quickly changing marketplace is based less on standardized manufacturing than on flexibility. By utilizing information technologies that place emphasis on communications, computing, and content, companies can attain the requisite flexibility. The boundaries of firms blur as employees and stakeholders interact with fewer encumbrances and acquire more information to be distributed between each other. Companies use information they acquire through new information and telecommunication technologies to gain instant access to the needs of each of its external stakeholders; employees who might have been previously separated by department or position will become linked electronically, as well, creating a less hierarchical structure. Both of these factors transform the organization into an environmental adaptive form, as the permeability of organizational boundaries increases. ...read more.

Although companies are increasing flexibility and cutting costs, they are also creating problems for their employees and eventually for themselves. Negative consequences usually begin with the employees left in a company after restructuring. After downsizing and restructuring they have now work harder because of the new job demands and threats of termination if performance expectations are not met. They begin to focus more on upgrading and expanding skills, working longer hours, and maintaining an edge over other employees to ensure employability in the company. The new information technologies also increase stress on employees by increasing the pace of work and minutely monitoring employee behaviour. Unfortunately, this competitive workplace atmosphere motivates employees to perform out of fear, while cooperation, which is emphasized in teamwork rhetoric within many flexible companies, becomes suppressed. The traditional economic social compact based on loyalty and job security can be replaced by one rewarding individual performance and contribution, which will be the things that count for advancement and pay opportunities. Employees start to work harder than ever, and they expect to share the fruits of success but real sharing will never materialize. This, not surprisingly, will be beginning to erode their faith in management and their belief in workplace reciprocity and will decrease their motivation and performance. Employees will continue to feel isolated and disconnected from their company, and collaboration and innovation in the company may drop, eventually leading to a decline in overall corporate performance. 1 Morgan, 1997 2 The Global Logistics Research Team at Michigan State University 3 Tapscott, 1997 1 ...read more.