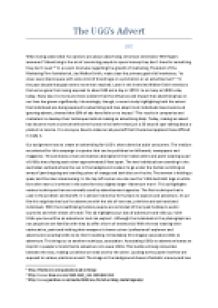 Our assignment was to create an advertising for UGGs shoes aimed at adult consumers.

﻿The UGG?s Advert ________________ DP2 When being asked what his opinions are about advertising, American entertainer Will Rogers answered ?Advertising is the art of convincing people to spend money they don?t have for something they don?t need.?[1] In a recent interview regarding the growth of marketing, President of the Marketing Firm Yankelovich, Jay Walker-Smith, made clear the primary goal of all marketers, ?to cover every blank space with some kind of brand logo or a promotion or an advertisement?.[2] In the past decade that goal seems more than reached. Later in the interview Walker-Smith mentions that we?ve gone from being exposed to about 500 ads a day in 1970?s to as many as 5000 a day today. Every day it is more and more evident that the influence and impact that advertising has on our lives has grown significantly. ...read more.

The two individuals are standing in the Australian outback where the sun in the background is about to go under the horizon emitting an array of jaw-dropping and startling colors of orange and dark blue on the sky. The woman is holding a spear and the man a boomerang. In the top left corner one can see the ?UGG Australia? logo in white font with next to it written in the same font but slightly larger ?Adventure more?. This ad highlights various techniques that are normally used by advertisement agencies. The first technique that is used is the problem and benefit. It is almost instinctive for humans to explore and adventure. An ad like this reignites that l**t for adventure with the site of two raw, primitive and yet hardened individuals. With the breathtaking horizon people are reminded of their past holiday to exotic countries and their dream of travel. ...read more.

It is the finishing touches of the message that the advert wants to convey. ?Adventure more? is catchy, short, and best of all to the point. This slogan easily anchors itself in people?s brain. The signature in this ad is unmistakable, besides from the logo of UGGs itself it shows the product itself being worn by two individuals, which comes to a shock to people first but quickly people realize the reasons why. Understanding how to make an advertising that fulfills the company?s wishes is very difficult; therefore they pay lots of money to individuals who have studied their lives on human behavior and how to control it. The amount of money in advertising couldn?t be summed better than the words of Philip Dusenberry ?I have always believed that writing advertisements is the second most profitable form of writing. The first, of course, is ransom notes?? ________________ [1] http://thinkexist.com/quotations/advertising/ [2] http://www.cbsnews.com/2100-3445_162-2015684.html [3] http://www.guardian.co.uk/media/2005/nov/19/advertising.marketingandpr ...read more.