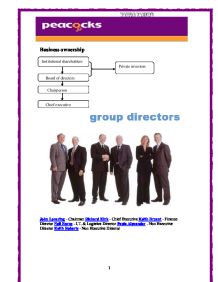 Business ownership Inst John Lovering - Chairman Richard Kirk - Chief Executive Keith Bryant - Finance Director Neil Burns - I.T. & Logistics Director Paula Alexander - Non Executive Director Keith Roberts - Non Executive Director Chairperson A person who is elected by the board of directors to represent Peacocks as a business and to help form and carry out its policy. Chief executive A person appointed by the board who is in charge of the day to day running of Peacocks. Institutional investors Financial institutions, such as banks, insurance companies and pension funds, which have billions of pounds to invest. Lender A person who can keep the needs of individual workers and the aims or objectives of Peacocks in harmony. Share capital The money Peacocks obtains by selling shares to investors. In Peacocks, the two most important people are the chairperson and the chief executive. In general terms, the chairperson represents the company in the outside world and takes a leading part in making policy. The chief executive is responsible for carrying out company policy and the day-to-day management of the business. In recent years, there have been changes in the ways Peacocks is managed or run. It has become more open and dramatic with a bigger emphasis on teamwork. However, all organisations need lenders who can keep employees working together towards agreed aims and objectives. Institutional investors own the majority of shares in Peacocks. Their huge blocks of shares give them great influence over the company's policies and the way in which they are run. The shareholders'votes at Peacocks' annual general meetings frequently decide who should be elected to the board of directors. If Peacocks is performing badly, institutional investors can force a chairman or even a whole board of directors to resign. Companies can never ignore their power. The shares can be bought and sold through a bank or the company, which deals in shares. ...read more.

This is also because there are many different businesses being set up which increases competition in the UK. For the past five years, location has been the same this is because every business want to locate in a place where they think their business will operate effectively and effectively. This is why all businesses have constantly concentrated on locating where facilities such as bus, trains, customers, employees and neighbourhood offices are available. Peacocks is located near a number of shops some of which also deal in cloth retailing. So there is a lot of competition. So business environment is more significant now because new businesses are opening up every now and then and they will be in the near future. Local Community are people living in the area which are more significant to Peacocks now because without their approval, the business would not run. Employment Trends occur if unemployment is high in the area, Peacocks would not have enough profits because people would not have enough money to shop. so that is why the factor is more significant now than before. Consumer Buying Habits are also significant now because if Peacocks does not get enough customers, it means that it is not meant to be located in that area. The company locates its stores in areas where people need good quality clothing. It does not locate because of employment situations. For some businesses only a few factors will be important. Other businesses like Peacocks may need to consider and balance a complex mixture of location factors. One important factor they considered was the infrastructure of business site: 1) The business needs very good transport systems for the site the most common are (road, rail, river, canal, ports) 2) The business needs good communication systems, telephone systems, fax e-mail. 3) Production is important to a business so Peacocks needs to know whether there are ancillary firms in the area to help deal with waste disposal, repair machinery and to transport the finished good. ...read more.

This will result in Peacocks' sales going down. The fast foods, which continue to be popular, also stop or prevent customers from buying products because they spend the money on food. They may not spend all of it on food but if they were going out to buy more items from Peacocks, they would buy less after eating because some of the money would be spent on food from McDonalds, KFC, and Burger king. Deregulation which has increased competition on bus services has affected Peacocks in a way that bus fares are raising and so people will not be able to afford Peacocks' products. How the Peacocks is responding Peacocks responds to the disposable income by providing discounts to students, the members of staff and offering some products half price. This attracts many consumers to buy the products knowing that they will either receive discounts or the products are for half price. But not all the products are reduced the half price products are reduced because of the number of days the spend on the shop floor. If the item is new, then the price will stay the same. Peacocks is responding to the expansion of many businesses by setting up new stores in other areas. Recently, a new Peacocks store was set up in Forest gate. I think it was due to a few clothing retail outlets in the area. Peacocks has responded to this by employing Students who also have got a chance of earning some money while going to college, which reduces boredom for all Peacocks' staff and profits have been maximised. Peacocks responds to bus fare competition by lowering their prices on the products they offer. To make it easier for the customers to afford them. The business is now offering half price products and also offering some items on sale in order to attract more customers to spend their money in the store rather than on holidays. ...read more.