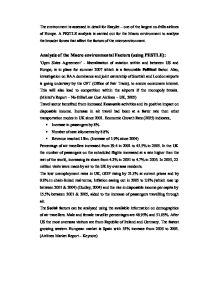 The environment is assessed in detail for EasyJet – one of the largest no-frills airlines of Europe. A PESTLE analysis is carried out for the Macro environment to analyse the broader forces that affect the factors of the microenvironment.

‘Open Skies Agreement’ - liberalization of aviation within and between US and Europe, is in place for summer 2007 which is a favourable Political factor. Also, investigation on BAA dominance and joint ownership of Scottish and London airports is going underway by the OFT (Office of Fair Trade), to ensure consumers interest. This will also lead to competition within the airports if the monopoly breaks. (Mintel’s Report – No-frills/Low Cost Airlines – UK, 2005)

Travel sector benefited from increased Economic activities and its positive impact on disposable income. Increase in air travel had been at a faster rate then other transportation modes in UK since 2001.Economic Growth Rate (2005) indicates,

The Social factors can be analysed using the available information on demographics of air travellers. Male and female traveller percentages are 48.95% and 51.05%. After US the most overseas visitors are from Republic of Ireland and Germany. The fastest growing western European market is Spain with 55% increase from 2003 to 2005. (Airlines Market Report – Keynote)

The increase of Polish workers to UK has also made Poland a good source of visitors to UK, leading to new routes to Poland. Eastern Europe including Bulgaria and Hungary are fast growing overseas destination for UK residents.

The Legal factors include the constraints on the amount of information collected about the passenger and the Aviation Tax regulations. (Fares – Civil Aviation Authority)

Effects on Environment and global warming due to increased air travel over the past 5 years might lead to higher tax and restriction on the number of flights. This factor along with Technological innovation suggests that the future of aviation is in huge airbuses such as A830; passengers will travel to major airports on such planes till they further board on small jets, increasing the demand of small planes domestically. (Airlines Market report – Keynote)