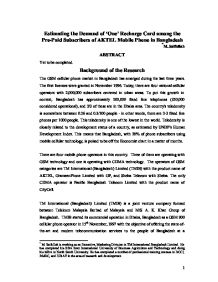 Estimating the Demand of 'One' Recharge Card among the Pre-Paid Subscribers of AKTEL Mobile Phone in Bangladesh *M. Saifullah ABSTRACT Yet to be completed. Background of the Research The GSM cellular phone market in Bangladesh has emerged during the last three years. The first licenses were granted in November 1996. Today, there are four national cellular operators with 2,000,000 subscribers centered in urban areas. To put this growth in context, Bangladesh has approximately 500,000 fixed line telephones (350,000 considered operational), and 2/3 of these are in the Dhaka area. The country's teledensity is somewhere between 0.26 and 0.3/100 people - in other words, there are 2-3 fixed line phones per 1000 people. This teledensity is one of the lowest in the world. Teledensity is closely related to the development status of a country, as estimated by UNDP's Human Development Index. This means that Bangladesh, with 28% of phone subscribers using mobile cellular technology, is poised to be off the Economist chart in a matter of months. There are four mobile phone operators in this country. Three of them are operating with GSM technology and one is operating with CDMA technology. The operators of GSM categories are TM International (Bangladesh) Limited (TMIB) with the product name of AKTEL, GrameenPhone Limited with GP, and Sheba Telecom with Sheba. The only CDMA operator is Pacific Bangladesh Telecom Limited with the product name of CityCell. TM International (Bangladesh) Limited (TMIB) is a joint venture company formed between Telekom Malaysia Berhad of Malaysia and M/S A. K. Khan Group of Bangladesh. TMIB started its commercial operation in Dhaka, Bangladesh as a GSM 900 cellular phone operator in 15th November, 1997 with the objective of offering the state-of-the-art and modern telecommunication services to the people of Bangladesh at a competitive price. ...read more.

Changes in one or more of these determinants will cause the entire demand curve to shift to a new position. The most obvious determinant of demand is income. Consumers' incomes influence their ability to purchase goods and services. For the normal goods, an increase in income will cause consumers to purchase more of a product than before at each possible price. However, an increase in income will cause consumers to purchase less of an inferior good, thus shifting the demand curve to the left. When their incomes increase, consumers may choose to buy less of these products. Consumers' attitude refers to- how well they like the product relative to other products. This is also an important determinant of demand. A change in attitude will affect the demand for products. Price expectations may also influence consumer behavior. For example, the more the expectation is closer to the actual price, the more likely that the consumer will use that product. A somewhat less obvious determinant of demand is the price of related goods. Although all goods compete for a consumer's income, the price of substitutes and complements may be particularly important in explaining consumer behavior. Substitutes are simply products that can be used in place of other products because to a greater or lesser extent they satisfy the same consumer wants. Complements are products normally purchased along with or in conjunction with another product. Another determinant of demand is the number of consumers in the market. The more consumers who demand a particular product, the greater the total demand for the product. When the number of consumers increases, the demand curve for the product will shift to the right to show that a greater quantity is now demanded at each price, lithe number of consumers declines, the demand curve will shift to the left. ...read more.

Data Collection Procedure As the mobile phone companies operate throughout the country it is very difficult to conduct a face-to-face interview. A telephone interview is used as the most appropriate option. A random number table is used to select the phone numbers with replacement. The Demand Function Following is the demand function of this research: Qx = a0 + a1Px + a2I + a3T + a4E + a5Py + e In my demand function the dependent variable Qx refers to the demand of 'One' Recharge Card in Bangladesh. It is measured by simply recording the number of different cards recharged against the respondents' accounts. The first independent variable Px refers to price of the 'One' Recharge Card. 'One' Recharge Card is available in two different price. So I can easily identify the shift in demand due to the variation of price. The second independent variable I refers to the income of the subscriber. The average monthly income of the subscriber is estimated from their sources of income. The third independent variable T refers to the subscribers' tests and preferences regarding the 'One' Pre-Paid mobile phone. The multi-attribute attitude model is used to identify the subscribers' tests and preferences regarding the 'One' Pre-Paid mobile phone. The fifth independent variable E refers to the expected price of the subscriber. The subscribers are asked about their expected per minute tariff. The forth independent variable Py refers to the per-minute tariff of related product which the subscriber has access. Analysis of the Demand Function Descriptive Analysis Before going for farther analysis I must take the opportunity to discover the characteristics of the sample I have taken. As my sample is fully randomized it is a true representative of my population. Empirical Analysis Yet to be completed. Test of Hypothesis Yet to be completed. Concluding Remarks Yet to be completed. ...read more.