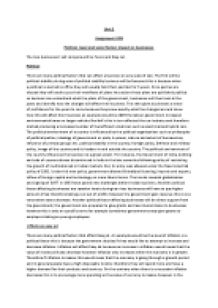 Political, legal and social factors impact on businesses The two businesses I will compare will be Tesco and Easy Jet.

﻿Unit 1 Assignment 4 P6 Political, legal and social factors impact on businesses The two businesses I will compare will be Tesco and Easy Jet. Political There are many political factors that can affect a business on any scale of size. The first will be political stability during eras of political stability business will be favoured this is because when a political is elected to office they will usually hold their position for 5 years. Once parties are elected they will seek to put their manifesto of plans into action these plans are published publicly so business can understand what the plans of the government, businesses will then look at the plans and identify how the changes will affect their business. This then gives businesses a sense of confidence for the years to come because they know exactly what the changes are and know how this will affect their business an example would be 2009 the labour government increased environmental taxes on larger vehicles like 4x4?s this in turn affected the car industry and therefore started producing a increased number of fuel efficient small cars such as electrical and hybrid cars. The political environment of a country is influenced by the political organisations such as philosophy of political parties, ideology of government or party in power, nature and extent of bureaucracy influence of primary groups etc. political stability in the country, foreign policy, Defence and military policy, image of the country and its leaders in and outside the country. The political environment of the country influences the business to a great extent. For instance, the Government of India, bottling and sale of cocoa-cola was discontinued in India in the late seventies following policy of restricting the growth of multinationals in Indian markets. But, its entry was allowed under the New Industrial policy of 1991. Under this new policy, government allowed liberalized licensing, imports and exports, inflow of foreign capital and technology on more liberal terms. ...read more.

Once the order has been placed Tesco's then deliver the food or products the next day depending on the delivery days. This also helps people who may not be able to make it to the supermarket store itself like disabled people so again it opens a new market which means they again will make more money. Tesco are always influenced by its customers and aim to operate around their needs and feedback because without their feedback Tesco's wouldn't know what they need to do to improve their business. Affects on stakeholders Legal factors Businesses must operate under the framework of the law failure to comply will result in fines and possibly impressments of directors; There are many hundreds of political and legal factors which will directly or indirectly affect businesses. In fact, most laws will have some relevance if you look deep enough there is however some main business related laws which are primarily there to serve the business world. Legal factors with business include, but are not limited to, licenses & accreditation, taxes, permits & codes, liability, and Contractual. Political Factors would be affiliations with politics and/or political candidates, and dependency on political statutes and regulation. A business could flourish under one political entity, and be run out of business by another; as in additional taxes, regulations, or bans. Legal factors: these are related to the legal environment in which firms operate. In recent years in the UK there have been many significant legal changes that have affected firms' behaviour. The introduction of age discrimination and disability discrimination legislation, an increase in the minimum wage and greater requirements for firms to recycle are examples of relatively recent laws that affect an organisation's actions. Legal changes can affect a firm's costs (e.g. if new systems and procedures have to be developed) and demand (e.g. if the law affects the likelihood of customers buying the good or using the service). ...read more.

Obviously Tesco's might not be the only business selling a product a number of businesses could be selling the same thing. They could all fix the prices in the same way - by forming a cartel and all agreeing to sell at the same prices. This is unfair on customers and other businesses wishing to compete with the prices and products. It is also illegal! The government set up fair trading to stop this from happening so it gives all businesses the opportunities to compete with each other. This is called the OFT. The role of the OFT is to make sure that markets work well for all customers and giving them choices. The competition act 1998 makes these actions illegal to do. The other act (enterprise act 2002 ) gave the OFT power to give out fines and other punishments to businesses which engage in such actions. In 2009 it imposed fines totalling £129million on 103 construction companies in England who were going against the law. This would Affect Tesco's activities because they will have to make sure that all prices are fair and competitive with other companies prices to allow the general public to have a good and fair choice in products that they wish to purchase. Social Over time changes occur in society that has the potential to affect businesses in terms of activity and thought process, these changes can include: 1. Population and demographics. 2. Changes in structure. 3. Household and families. 4. Education. 5. Attitudes to work. 6. Religions. 7. Attitudes to male and female roles. 8. Ethics. Social factors can affect a business as tastes and likes can change. For example, if a business that sells a lot of junk and unhealthy food and the nation is becoming more health conscious then the business will generate less revenue. Social factor affects the productivity and labour supply. An example of it includes the population structure, language ability, education level etc. ...read more.