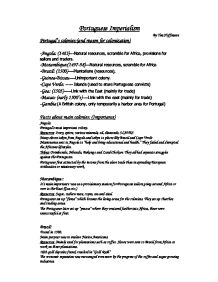 Portugal's colonies (and reason for colonization).

Slaves were sent to Brazil from Africa to work on these plantations. 1693-gold deposits found, resulted in "Gold Rush" The economic expansion was encouraged even more by the progress of the coffee and sugar-growing industries. Important people: Vasco de Gama-explorer Bartholomew Dias-explorer Important facts: -Almost all the profits obtained in the colonies through plantations or resources went back to Portugal. -Many African countries tried to fight the Portuguese; some were successful to an extent. It was because of certain tribes that Portuguese boundaries could not be pushed further. -Portuguese were not a great strength, were not very wealthy and had a small population, their major advantage was having links with the East. ...read more.

Fifty-three Africans were purchased by two Spanish planters and were being shipped to their plantations. Things did not go as planned, however, and the Africans seized control of the ship after killing the captain. They ordered the crew to turn, the ship, and they did, but to not back to Africa has the Africans had requested, but to America. In America, the US Supreme court eventually found the Africans not guilty. 35 returned home, the rest died at sea or in prison. Timeline (Getting rid of slavery) 1842: Portugal agreed to abolish all forms of slave trade. 1869: Abolished slavery 1884-85: Berlin conference, decided that Portugal was given Mozambique, Angola and Guinea. 1886: Portugal signed two treaties that enclosed the boundaries of Portuguese, French and German territories 1902-17: The Portuguese wanted to help the Africans but he Africans turned against the Portuguese and revolted. ...read more.