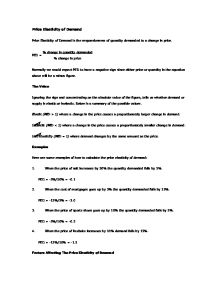 Price Elasticity of Demand Price Elasticity of Demand is the responsiveness of quantity demanded to a change in price. PED = % change in quantity demanded % change in price Normally we would expect PED to have a negative sign since either price or quantity in the equation above will be a minus figure. The Value Ignoring the sign and concentrating on the absolute value of the figure, tells us whether demand or supply is elastic or inelastic. Below is a summary of the possible values. Elastic (PED > 1) where a change in the price causes a proportionately larger change in demand. Inelastic (PED < 1) where a change in the price causes a proportionately smaller change in demand. Unit elasticity (PED = 1) where demand changes by the same amount as the price. Examples Here are some examples of how to calculate the price elasticity of demand: 1. When the price of salt increases by 50% the quantity demanded falls by 5%. PED = -5%/50% = -0.1 2. When the cost of mortgages goes up by 5% the quantity demanded falls by 15%. ...read more.

Applications 1. Prices may rise when there is insufficient spare capacity in the economy to respond to an increase in demand. 2. Inelasticity of supply in the short run contributes to understanding why the price of primary products tends to be more volatile than the price of manufactured goods Definition: Measures the responsiveness of demand to a given change in price. It is an important piece of information to the firm as it helps them predict how much the demand for their product will change if they change price. We calculate the price elasticity from the following formula: Price elasticity of demand = % change in the demand / % change in the price If the figure is greater than one then the product is described as elastic or demand is sensitive to price. This implies that the change in the demand will be proportionately larger than the change in price. However, if the value is less than one then the good has an inelastic demand curve. The vale of the price elasticity gives important information on how an increase in price will affect the total revenue of the firm. ...read more.

Those least able to afford cigarettes are those most likely to smoke. Worse, almost the only people who genuinely cannot afford to smoke: the very lowest income families supporting young children, are at least twice as likely to smoke as similar families who could only just afford to smoke if they wanted to" The normal price of tobacco has a disproportionate effect on the living standards of Britain's poorest households, for whom expenditure on tobacco is a larger proportion of disposable income.[15] Studies conclude that the motivation to stop smoking does not come from tobacco price increases. The 1998 Independent Inquiry into Health Inequalities15 states: "A recent longitudinal survey of lone mothers found that living in severe hardship was a primary deterrent to quitting. This makes it unlikely that increasing the price of tobacco, and so decreasing disposable income and increasing hardship, will increase cessation rates in disadvantaged households". People from low income groups may also believe that the government is not committed to smoking cessation due to the revenue raised from taxation policies. A respondent from qualitative research in Scotland suggested:[16] "They're making so much money out of cigarettes: they promote for you to give up, but on the other hand they're making millions out of it". ...read more.