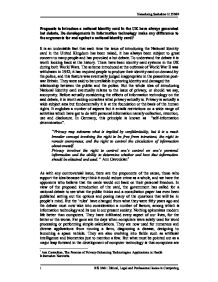 Proposals to introduce a national identity card in the UK have always generated hot debate. Do developments in information technology make any difference to the arguments for and against a national identity card? It is an undeniable fact that each time the issue of introducing the National Identity card in the United Kingdom has been raised, it has always been subject to great concern to many people and has provoked a hot debate. To understand the debate it is worth looking back at the history. There have been identity card systems in the UK during both World Wars. The scheme introduced at the outbreak of World War II was withdrawn in 1952; it has required people to produce their identity card on demand by the police, and this feature was eventually judged inappropriate in the peacetime post-war Britain. They were said to be unreliable in proving identity and damaged the relationship between the public and the police. But the whole idea of introducing National Identity card eventually relates to the issue of privacy, or should we say, anonymity. Before actually considering the effects of information technology on the said debate, it is worth asking ourselves what privacy actually is. Privacy is actually a wide subject area but fundamentally it is at the foundation or the basis of the human rights. ...read more.

This system is already being used for asylum seekers in the UK, whose Application Registration Card contain fingerprint biometric information. This makes sure that the same person does not apply for asylum more than once. They also put forward the fact that it would simplify the access to state/government services. The latter is actually why cards have become ingrained across much of Europe. With regards to the issue of privacy about the gathering and sharing of biometric data, proponents argue that the data can be encrypted when it has been gathered and the original data can then de discarded to prevent identity theft. Addressing the question of security, advocates of the cars scheme argue that security can be achieved only with a smart card that can cross-check various storehouses of personal data to determine whether someone could be viewed with suspicion. That would mean, for example, that an airline ticket agent swiping a card would be warned, by law enforcement, intelligence and some private databases, about an individual who overstayed a tourist visa, is on a government watch list or who is wanted for crime. The use of identity cards by citizens in certain European countries also allow these people to use their cards for cross border travel within the union, thus dispensing them of the use of bulky passports and ...read more.

It is also claimed by the proponents that the Human Rights Act was passed to further protect civil liberties and regular calls for the introduction of the ID cards have been rejected by Government for the last fifty years since Ministers have recognized that their aim is to seek to protect freedom and democracy, and if they are to undermine these values, terrorists will claim it as a victory. As mentioned earlier, the introduction of the national identity card has become a pressing issue in the aftermath of the September 11th in the US. There is growing concern for national security but the question to ask ourselves is whether this concern should be at the detriment of our privacy, since without privacy, other societal goals such as free speech, association, dignity and liberty will be compromised. As Roberto Unger wrote, "The most radical freedom is freedom to be, to be a unique person in the world as it is."4 To end with, "the success of any identity card scheme would depend on the confidence those using it and. There would have to be a balance between ensuring individual privacy but at the same time keeping loopholes firmly shut against fraudsters and criminals" as stated by Heather Green. ...read more.