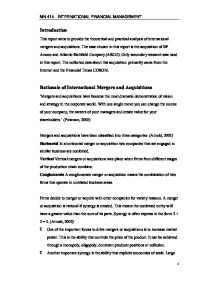 Provide the theoretical and practical analysis of international mergers and acquisitions.

Introduction This report aims to provide the theoretical and practical analysis of international mergers and acquisitions. The case chosen in this report is the acquisition of BP Amoco and Atlantic Richfield Company (ARCO). Only secondary research was used in this report. The collected data about this acquisition primarily came from the Internet and the Financial Times CDROM. Rationale of International Mergers and Acquisitions 'Mergers and acquisitions have become the most dramatic demonstration of vision and strategy in the corporate world. With one single move you can change the course of your company, the careers of your managers and create value for your shareholders.' (Puranam, 2000) Mergers and acquisitions have been classified into three categories: (Arnold, 2002) Horizontal In a horizontal merger or acquisition two companies that are engaged in similar business are combined. Vertical Vertical mergers or acquisitions take place when firms from different stages of the production chain combine. Conglomerate A conglomerate merger or acquisition means the combination of two firms that operate in unrelated business areas. Firms decide to merger or acquire with other companies for variety reasons. A merger or acquisition is rational if synergy is created. This means the combined entity will have a greater value than the sum of its parts. Synergy is often express in the form 2 + 2 = 5. (Arnold, 2002) ? One of the important forces to drive mergers or acquisitions is to increase market power. This is the ability that controls the price of the product. It can be achieved through a monopoly, oligopoly, dominant producer positions or collusion. ? Another important synergy is the ability that exploits economies of scale. Large size often leads to lower cost per unit of output. Economies in marketing can be achieved through the use of common distribution channels or joint advertising. There are also economies in administration, research and development, purchasing and finance. ? By vertical merger or acquisition an acquirer may achieve more efficient co-ordination on the different levels. ...read more.

Organisational efficiencies, including reductions in staff and corporate overheads; ? More focused exploration efforts through the use of shared technology to reduce the risk of unsuccessful wells; ? Standardisation and simplification of business processes; ? Rationalisation of operations. 'The anticipated cost savings are expected to be offset by restructuring charges and transaction expenses of approximately $1 billion in the first year after the Effective Date, including approximately $400 million in UK stamp duty to be incurred on the issue of BP Amoco ADSs to ARCO Common Shareholders. BP Amoco expects to reduce the worldwide staff of the combined company by approximately 2,000 positions as a result of the Combination.' There are also some additional factors the BP Amoco Board considered. ? The opinion of Morgan Stanley show that the Exchange Ratio was fair from a financial point of view to BP Amoco at 30 March 1999; ? The combination would be subject to acquisition accounting under UK GAAP, resulting in on-going additional depreciation and amortisation charges; ? The transaction would produce significant increased cash flow through reduced cash costs due to the targeted synergies and reduced capital expenditure through the application of BP Amoco capital efficiency targets to all of the combined company's assets; ? The growth opportunities in ARCO's current asset base could contribute up to 300,000 barrels per day in oil or oil equivalents of new production by 2010. After the consideration of these various factors relevant to evaluation of the acquisition, the BP Amoco Board made the decision to combine with ARCO. All above these motives were shareholder oriented and for maximizing shareholders' wealth. The acquisition of BP Amoco and ARCO will make BP Amoco the largest non-state owned oil producer in the world and the largest oil and gas producer in both the US and the UK. ARCO will bring BP Amoco distinctive assets that will diversify its portfolio of international assets, extend its strategic position in key areas, and significantly increase its opportunities for growth. ...read more.

The net debt ratio was 27%, compared with 23% a year ago. The total dividends announced for 2000 were $4,625 million, against $3,884 million in 1999. Dividends per share for 2000 were 20.50 cents, an increase of 2.5% compared with 20.00 cents per share in 1999. (BP Amoco's annul review 2000) Figure 4 (BP Amoco's annul review 2000) Every part of business contributed to the achievements of 2000. (See Figure 4) Exploration and production produced a record result. Higher gas production and the ARCO acquisition offset lower oil production. Gas and power made an improved operating contribution that partly offset increased business development costs. Refining and marketing had an outstanding year with record results and a highly competitive 22% return on fixed assets. Refining benefited from significantly higher margins and we saw strong growth in convenience sales, coupled with strong oil trading performance and cost reductions. The acquisition of ARCO gave BP Amoco coast-to-coast market access in the USA. Chemicals' demand was firm in the first half of the year, but then weakened in the final two quarters because the global economy was slow. Annual production rose 1% to 22.1 million tones. (BP Amoco's annul review 2000) From the above performance of BP Amoco, we can easily draw a conclusion that the company got a great improvement in its business after the acquisition with ARCO. According to the comparison of share price with Exxon Mobil (See Figure 2) and FTSE 100 (See Figure 3), BP Amoco's share price performed good after the acquisition. The excellent performance in business and rise of share price both mean the growth of shareholders' wealth. Conclusion According to the theoretical analysis of rationale for international acquisitions or mergers, international merger or acquisition is a key strategy for companies, which plan to successfully expand their business globally. Through the analysis of stock market and foreign exchange market, particularly in the UK and US, they can be regarded as efficient. By the study of the acquisition of BP Amoco and ARCO, a successful combination is able to maximise shareholders' wealth in both sides. ...read more.