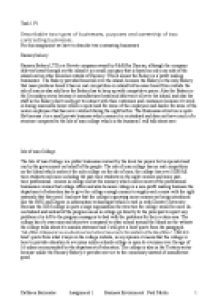 Purposes, Ownership and Stakeholders in Ramsey Bakery and the Isle of Man College.

﻿Task 1 P1 Describable two types of businesses, purposes and ownership of two contrasting businesses. For this assignment we have to describe two contrasting businesses. Ramsey bakery Ramsey Bakery LTD is a Private company owned by Mr&Mrs Duncan, although the company delivers bread through out the island it is a small company that is based on only one side of the island and no other branches outside of Ramsey. Which means the Bakery is a profit making businesses . The Bakery provided bread all over the island, because the Bakery is the only Bakery that mass produces bread it has no real competition on island but because bread from outside the isle of man is also sold here the Bakery has to keep up with competitive prices. Also the Bakery is the Secondary sector because it manufactures bread and delivers it all over the island, and also the staff in the Bakery don't really get to interact with their customers and consumers because it's work is during unsociable hours which is quite hard for some of the employees and harder for some of the newer employees that has never worked during the night before. ...read more.

Because the IOM college is quite a large organisation the structure for college would be more de-centralised and instead of the program areas in college go directly to the principal to report any problems it is left to the program managers to deal with the problems for their certain area. The college has it's own aims and objective compared to other school around the Island on the website the college talks about it's mission statement and I will give a brief quote from the paragraph. "Isle of Man College exists as an educational and cultural resource for the residents of the Isle of Man,?. This is a brief quote from what it says on the college website, in my opinion it means that the college is here to provide education to everyone unlike schools college is open to everyone over the age of 16 unless recommended by the department of education. The college is also in the Tertiary sector because unlike the Ramsey Bakery it provides service to the community instead of manufacture good. ...read more.

Local community. The local community is also one of colleges main stakeholder because sometimes the local community comes to college just visit or go to the restaurant or the canteen to have a snack or eat. Suppliers. The Bakery's suppliers are one of their most important stakeholder because they rely on their suppliers to be on time with deliveries or else they would not have their products delivered on time. Government. The government has to have interest in the College's actions because it's a government managed business. Local community. The local community are the 80,000 residents on the isle of man that take interest in the Bakery's products. Competitors. The colleges main competitors are the Sixth forms in the high schools around the island because some schools offer similar subjects to college and they want to be able to keep students in their school instead of going somewhere else. Government. The Government in interested in the bakery because they are the only bakery on the island that delivers to government facilities and because it is a local business they want to keep it thriving for a long time. Competition Kathleen Barrientos Assignment 1 Business Environment Paul Martin ...read more.