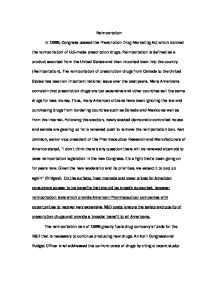 Reimportation In 1988, Congress passed the Prescription Drug Marketing Act which banned the reimportation of U.S-made prescription drugs. Reimportation is defined as a product exported from the United States and then imported back into the country (Reimportation). The reimportation of prescription drugs from Canada to the United States has been an important national issue over the past years. Many Americans complain that prescription drugs are too expensive and other countries sell the same drugs for less money. Thus, many American citizens have been ignoring the law and purchasing drugs from bordering countries such as Canada and Mexico as well as from the internet. Following the election, newly elected democratic controlled house and senate are gearing up for a renewed push to remove the reimportation ban. Ken Johnson, senior vice president of the Pharmaceutical Research and Manufacturers of America stated, "I don't think there's any question there will be renewed attempts to pass reimportation legislation in the new Congress. It's a fight that's been going on for years now. Given the new leadership and its priorities, we expect it to pop up again" (Bridges). ...read more.

The high prices for prescription drugs in America are mandatory because without it, drug companies would not be able support the funds of research and development for producing new drugs. Technology would not continue and the production of new drugs would end. The Reimportation ban is necessary to regulate the safety of foreign drugs. The FDA continues to remain concerned about the importation of prescription drugs into the United States. The FDA cannot assure that the drugs imported from foreign countries are the same products approved by the FDA. Because the drugs are imported overseas the FDA cannot inspect and assure that the drugs are safe. The FDA ha found many drugs obtained from foreign sources that appear to be the same as FDA approved prescription drugs but in fact are not the same quality. The FDA has come to the conclusion that consumers are exposed to a number of risks when they purchase drugs from foreign sources or from sources that are not operated by pharmacies licensed under state pharmacy law. The drugs imported from foreign sources may be expired, subpotent, contaminated or counterfeit product, an incorrect dose, or medication unaccompanied by adequate directions for use. ...read more.

Although in the short run eliminating the reimportation act will most likely reduce the prices of drugs currently on the market, it comes with significant risks such as quality, purity and effectiveness. Additionally, it is important not to forget that in viewing Americans welfare, it is not just the welfare of today's society, but the welfare of future generations that would be significantly disadvantaged without the investment of R&D by American pharmaceutical companies to find new cures and remedies. In summary, reimportation laws in the long run better benefit American citizens. The ban on importing goods from foreign countries contributes to recover the expensive research and development costs from drug companies. Without the ban, hundreds of drug companies would become bankrupt and thus there would be no way to produce new drugs and cures. The reimportation laws also help ensure the safety of all American citizens. Since the drugs are imported overseas the FDA cannot inspect and assure that the drugs are safe. The FDA reported that American consumers are exposed to a number of risks when purchasing prescription drugs from abroad. The drugs imported from foreign sources may be expired, subpotent, contaminated or counterfeit product, an incorrect dose, or medication unaccompanied by adequate directions for use. ...read more.