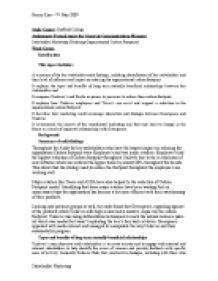 Report. It compares Unilevers and Nestle responses to pressures to reduce their carbon footprint. It explains how Unilever employees and Tescos can assist and support a reduction in the organisational carbon footprint

﻿Henry Kiss ? 7th May 2009 Study Centre: Sheffield College Assignment: Formal report for Coporate Communications Manager Stakeholder Marketing (Reducing Organisational Carbon Footprint) Word Count: Introduction This report includes: A summary of the key stakeholder audit findings, including identification of key stakeholders and their level of influence and impact on reducing the organisational carbon footprint. It explains the types and benefits of long term mutually beneficial relationships between key stakeholders and It compares Unilever?s and Nestle responses to pressures to reduce their carbon footprint. It explains how Unilever employees and Tesco?s can assist and support a reduction in the organisational carbon footprint It describes how marketing could encourage interaction and dialogue between Greenpeace and Unilever It recommends the aspects of the coordinated marketing mix that may need to change in the future as a result of improved relationships with Greenpeace. Background Summary of audit findings Throughout the Audit the key stakeholders who have the largest impact on reducing the organisation Carbon footprint were Employee?s and two major retailers. Employee?s had the highest reduction of Carbon footprint throughout Unilever due to the re-education of new software which has reduced the kg/per tonne by almost 68% throughout the decade. This shows that the strategy used to reduce the footprint throughout the employee?s are working well. Major retailers like Tesco and ASDA have also helped In the reduction of Carbon Footprint model. Identifying that these major retailers have been wasting fuel on unnecessary trips the organisation has become a lot more efficient with their warehousing of their products. Looking into pressure groups as well, the audit found that Greenpeace, appealing against of the products which Unilever sells high in also had a massive impact on the carbon footprint. Unilever was using deforestation techniques to reach the natural resource palm oil which was needed but wasn?t replanting the tree?s they had cut down. Greenpeace appealed with media interest and managed to manipulate the way Unilever and their sustainability program. ...read more.

Palm oil greatly used all over the world, had a price increase in 2008 due to the fact that less deforestation due to the policies of sustainability that Unilever had implemented meant that the supply and demand rule changed. The demand for palm oil kept at the same level but for the supply due to the slow running of deforestation gradually lowered shooting the price up. Greenpeace seeing the price of the palm oil rise greatly meant that the relationship between Unilever and the pressure group was also gained. Unilever took the considerations in which Greenpeace had put forward. These improved relationships meant the Unilever and Greenpeace have now been working in close conjunction with each other since the appeal rose. The product will now contact promotion material such as Greener labelling to show the appreciation of which Unilever undertook from the appeal from Greenpeace. Unilever is located globally all over the world. Pressure groups at current time have no appeals against current locations where Unilever are placed. Promotion will also have to change due to pressure groups. Some promotional material will need to emphasize the fact that special greener ways in which that product was produced was implemented onto it. This shows us that the pressure group is working in close areas with Unilever. The price of certain products will have to go up due to the increased demand of these products. With the large amount of products moving around Unilever will be spending more on transport which in effect will stir the relationships between the organisation and the pressure groups. Using the palm oil example we saw that the pressure group Greenpeace had used media strategies to create coverage of the massive deforestation that Unilever had been doing for the extraction of palm oil. After the appeal Unilever bought policies in covering them from another appeal which the pressure group could imply on them. ...read more.

Recently in May 2008 Greenpeace publically challenged Unilever about the ways on which they have been working on Palm Oil products. Unilever have been working to promote a sustainability plan in palm oil cultivation. During the 1990?s they started developing a policy ?Good Agricultural Practice Guidelines for Palm Oil. Massive deforestation lead to a huge amount of greenhouse gases as the carbon in sequestered in the trees. Being generally challenged by Greenpeace Unilever became threatened by outrage from the non-profit organization. This had great impact on Unilever and their policies to try and reduce the amount of deforestation which was occurring at the time. The influence which Greenpeace can create on an organization using media to manipulate companies into looking wasteful is high. Unilever devised a plan to create a body called ?The Roundtable on Sustainable Palm Oil (RSPO)?. Towards the end of 2007 RSPO launched this new certification programme, making it possible to grow sustainable palm oil. Unilever had devised goals to tackle the growing problem on not be sustainable within the Palm Oil industry. ?First, we have assembled a large international coalition of some 50 companies, banks and NGOs who share the same goals as us. The purpose of the coalition is to campaign for change among palm oil growers.? ?Secondly, we are working within the institutional framework of the RSPO to effect this change. At the November 2008 meeting of the RSPO, we supported resolutions from WWF and Oxfam which put pressure on suppliers and users of palm oil to change their ways.? ?Thirdly, we are conducting an independent audit of our own suppliers to ensure that all of them are respecting the principles and criteria of the RSPO.? ?Finally, we are working closely and productively with Greenpeace and other NGOs to promote change within the industry.? Objectives gathered from: (http://www.unilever.com/sustainability/environment/agriculture/sustainablepalmoil/, 7-05-09) The reason why Unilever had created this new Body was due to the influence Greenpeace had given on Unilever making them look bad to consumers. Stakeholder Marketing ...read more.