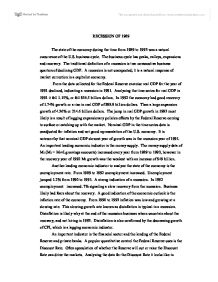 RECESSION OF 1989 The state of the economy during the time from 1989 to 1993 was a natural occurrence of the U.S. business cycle. The business cycle has peaks, valleys, expansions and recovery. The traditional definition of a recession is two consecutive business quarters of declining GDP. A recession is not unexpected; it is a natural response of market correction in a capitalist economy. From the data collected for the Federal Reserve exercise real GDP for the year of 1991 declined, indicating a recession in 1991. Analyzing the time series for real GDP in 1991 it fell 1.15%, or fell $56.5 billion dollars. In 1992 the economy had good recovery of 1.74% growth or a rise in real GDP of $98.9 billion dollars. Then a large expansion growth of 4.36% or 214.6 billion dollars. The jump in real GDP growth in 1993 most likely is a result of lagging expansionary policies effects by the Federal Reserve coming to surface or catching up with the market. Nominal GDP in the time series data is unadjusted for inflation and not good representation of the U.S. ...read more.

These rate cuts are common during a rescission to encourage lending and investment growth. The movement in 1991 indicates aggressive policy by Board Members. The trend in rate cutting also lowers the prime rate and the federal funds rate. A second important quantitative control used by the Federal Reserve is Open Market Operations. The buying and selling of government securities. In the time series data for this exercise Open Market Operation where highly expansionary. The Fed continually increased purchases on the open market. The fed proceeded cautiously by increasing purchases at a decreasing rate. Sales of securities decreased into 1991 and jumped in 1992. Likely to control the lagging effects of expansionary policy preceding 1991. 3b) The Federal Reserve has three quantitative controls. One is the Reserve Requirement. The Reserve Requirement is the amount of funds that banks must hold in reserve against deposits made by their customers. This money must be in the bank's vaults or at their Federal Reserve district bank. This ratio is set by the Board of Governors. Over this time the Fed did not nor typically does not adjust the Reserve Requirement. ...read more.

See attachment, next page. It is my assessment that the Federal Reserve was successful in the policy actions of fighting the 1991 recession. The Federal Reserve was able to control employment, keep prices stable and provide a growth relatively quick. I feel it was successful because the Fed was aggressive in actions of expansionary policy. The 250 basis point cut in 1991 and 50 basis point cut in 1992 proved to be effective. The Fed was aggressive because they used all three quantitative tools in the time series data. Open Market Operations, Discount Rate and the Reserve Requirement. The effective control of inflation by balancing OPO. It is important to note the decreasing trend of the Money Multiplier that slowed the rate of respending during expansionary policy. If Fed overlooked this then the possibility of high inflation in the recovery from a recession could have resulted in higher unemployment. Business would be uncertain about future investments and not seek opportunities of growth. It was a slow recovery that didn't show into two years later in 1993 when real GDP increased over 4%. The uncertainty in the economy included a war in Middle East, fiscal policy decisions, and demographics. Capital spending became uncertain due to uncertainty in the economy and slowed the recovery of the 1991 recession. ...read more.