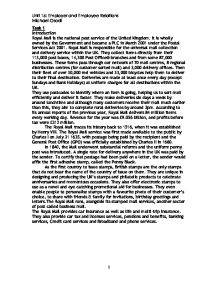 Task 1 Introduction Royal Mail is the national post service of the United Kingdom. It is wholly owned by the Government and became a PLC in March 2001 under the Postal Services Act 2001. Royal Mail is responsible for the universal mail collection and delivery service within the UK. They collect items directly from their 113,000 post boxes, 14,300 Post Office(r) branches and from some 87,000 businesses. These items pass through our network of 70 mail centres, 8 regional distribution centres (for customer sorted mail) and 3,000 delivery offices. Then their fleet of over 30,000 red vehicles and 33,000 bicycles help them to deliver to their final destination. Deliveries are made at least once every day (except Sundays and Bank Holidays) at uniform charges for all destinations within the UK. They use postcodes to identify where an item is going, helping us to sort mail efficiently and deliver it faster. They make deliveries six days a week by around lunchtime and although many customers receive their mail much earlier than this, they aim to complete rural deliveries by around 3pm. According to its annual reports of the previous year, Royal Mail delivers 84 million items every working day. Revenue for the year was �9.056 billion, and profits before tax were �312 million. The Royal Mail traces its history back to 1516, when it was established by Henry VIII. The Royal Mail service was first made available to the public by Charles I on July 31 1635, with postage being paid by the recipient and the General Post Office (GPO) was officially established by Charles II in 1660. In 1840, the Mail underwent substantial reforms and the uniform penny post was introduced. A single rate for delivery anywhere in the UK was paid by the sender. To certify that postage had been paid on a letter, the sender would affix the first adhesive stamp, called the Penny Black. ...read more.

However, a large amount of that money was linked to performance and reaching targets set such as faster deliveries and more efficient working as well as altered shifts. The deal also came with strigs attached, in the sense that the CWU had to agree the loss of another 10,000 jobs through voluntary redundacy in order for the deal to come into effect. In order to survive in the world of business, you need to keep up with the modern world. They need to be efficient, as they will need to be reliable when delivering. They have lost many deals with big-name companies due to their unreliability, losing business in the process. Key customers, including the Department of Work and Pensions, BT and a number of high street banks, have disassociated themselves with the Royal Mail, including online retailer Amazon, who recently switched its �8m contract to another supplier. The Royal Mail will also need to be productive in order to avoid the threat of competition in the postal market, as Deutsche Post, the German logistics group and TPG, the quoted Dutch postal group, have made their intentions clear to be forces in the UK market. Royal Mail also have to offer better pay & working conditions to its workers to avoid future strikes or disagreements. They could do this by offering flexibility and improved pay structures that are above inflation. Royal Mail is losing business because they have failed to change and modernise. If they don't modernise, the future of the company and everyone within will look bleak. They could modernise by investing in new technology so they can keep in line with their competitors and will eliminate the threat of small businesses adopting e-commerce, which will mean less mail. They could also give their postal workers a chance of career progression, where there could be promotion steps in place so that postal workers do not stay stagnant and have the opportunity to move up within Royal Mail. ?? ?? ?? ?? Unit 16: Employer and Employee Relations Michael Osodi 1 ...read more.