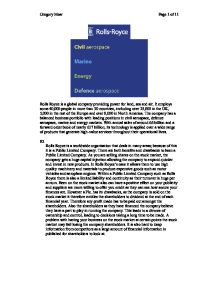 Rolls Royce is a global company providing power for land, sea and air. It employs some 40,000 people in more than 30 countries, including over 25,000 in the UK, 5,000 in the rest of the Europe and over 8,000 in North America. The company has a balanced business portfolio with leading positions in civil aerospace, defence aerospace, marine and energy markets. With annual sales of around �6 billion and a forward order book of nearly �17 billion, its technology is applied over a wide range of products that generate high-value services throughout their operational lives. E1 Rolls Royce is a worldwide organisation that deals in many areas; because of this it is a Public Limited Company. There are both benefits and drawbacks to been a Public Limited Company. As you are selling shares on the stock market, the company gets a huge capital injection allowing the company to expand quicker and invest in new products. In Rolls Royce's case it allows them to use high quality machinery and materials to produce expensive goods such as motor vehicles and aeroplane engines. Within a Public Limited Company such as Rolls Royce there is also a limited liability and continuity as their turnover is huge per annum. Been on the stock market also can have a positive effect on your publicity and suppliers are more willing to offer you credit as they can see how secure your finances are. However a Plc. has its drawbacks, as the company is sold on the stock market it therefore entitles the shareholders to dividend at the end of each financial year. Therefore any profit made has to be paid out amongst the shareholders. Also the shareholders as they have financed the company believe they have a part to play in running the company. This leads to a divorce of ownership and control, leading to decisions taking a long time to be made. ...read more.

The type of communication is dependent on the skills of the sender of receiver e.g. whether they can read e-mails. I have also mentioned that when using technology such as a computer it does not breakdown or cause a power failure. If a company does have poor communication skills both internally and externally it can lead to low morale, an increased level of errors, hostile relations and lack of control in the business. E6 Within the factories of Rolls Royce they use a mainly capital intensive form of production this allows products such as engines to be made fast and all of the same quality. However when looking at the motor industry side of Rolls Royce it is clear that it is far more labour intensive which means the cars are made by hand causing it to be a far slower process and more expensive as you employ skilled workers. This is why the cars produced Rolls Royce is made when ordered by a customer. There is no guarantee that every car is going to be the same. This is a unique selling point for cars such as Rolls Royce at the upper end of the price market. When producing a product such as a jet engine Rolls Royce employs a batch production method. This involves a stage-by-stage method, which sees each operation performed on a number of products at the same time. Advantages of batch production are it provides more interesting jobs than in flow production, which will increase staff morale, and there is better utilisation of capital than in job production. Although slower than a flow production method, which is mainly automated, it is far quicker than a job production method, which suits hand made products. When producing a product it is certain you test the quality of the product. Quality however is subjective it is also qualitative as it is very difficult to measure. ...read more.

Rolls Royce at the current level has a high level of quality which needs to be maintained or bettered. The orders themselves been so big forms a forward order process which could see customers pulling out of buying large amounts of goods as they have to weight. If in the short term Rolls Royce could invest in faster machinery or more workers it could cut down the forward orders. In the long run however it would mean larger wage bills and higher risk of depreciation on the automated machinery. One objective that would change is to establish themselves a leading competitor in four growth markets. Once it has established itself which no doubt will be in the near future it must maintain that standard which will mean more orders. Because the company has based itself in four markets it means more areas to get money. If one market slows down like the civil aerospace department after the September 11th attacks, it can fall back on the other three markets maintaining business. A disadvantage of this means the need for experienced workers and management staff in these areas. The company must also make sure enough money is been produced to fund these four markets. It is there they must make a new objective to keep the shareholder happy and informed on the running of the business. This alternative would make the investor happier to input more money into the business if he or she believes there stake will hold its value or possibly increase. One other objective that needs to be met is the issue with been environmentally friendly; this could mean the creation of a new department within the business known as the environment protection department. However the drawback with creating a new department like this it would increase the wage bill as more workers are been employed. There is one other alternative to hiring new staff, you can train current staff already on the payroll from different departments as the need to make an entirely new department would not be cost effective. Gregory Mear Page 1 of 11 ...read more.