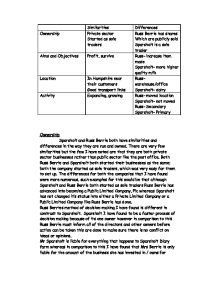 Similarities Differences Ownership Private sector Started as sole traders Russ Berrie has shares Which are publicly sold Sparsholt is a sole trader Aims and Objectives Profit, survive Russ- increase item made Sparsholt- more higher quality milk Location In Hampshire near their customers Good transport links Russ- warehouse/office Sparsholt- dairy Activity Expanding, growing Russ- moved location Sparsholt- not moved Russ- Secondary Sparsholt- Primary Ownership Sparsholt and Russ Berrie both have similarities and differences in the way they are run and owned. There are very few similarities but the few I have noted are that they are both private sector businesses rather than public sector like the post office. Both Russ Berrie and Sparsholt both started their businesses as the same; both the company started as sole traders, which was very easy for them to set up. The differences for both the companies that I have found were more numerous, such examples for this would be that although Sparsholt and Russ Berrie both started as sole traders Russ Berrie has advanced into becoming a Public Limited Company, Plc whereas Sparsholt has not changed it's status into either a Private Limited Company or a Public Limited Company like Russ Berrie has done. Russ Berries method of decision-making I have found is different in contrast to Sparsholt. Sparsholt I have found to be a faster process of decision making because of its one owner however in comparison to this Russ Berrie must inform all of the directors and other owners before action can be taken this are done to make sure there is no conflict on ideas or opinions. ...read more.

Russ Berrie Products" this objective is very similar in the way that it is not very specific and there is no time scale which makes it too generic and not nearly as effective. Another similarity I have noted between the two companies would be the aim to improve the quality of their products that are distributed to their customers. I have found that both the companies aim to improve the quality of their products, Russ Berrie aims to "produce high quality goods" whereas Sparsholt also aims to "To produce high quality milk" both these aims are similar and based on the same idea of making better products. However I have noted another difference between the two companies aims and objectives, Sparsholt is trying to promote a better understanding of animal welfare to locals and customers etc in comparison though to Sparsholts aim promote animal welfare Russ Berrie has no environmental objectives which could relate to Sparsholts objective to promote animal welfare. The last difference I noticed was the amount of objectives each company has listed, Russ Berrie has got three objectives listed however in comparison Sparsholt has got eight listed down, this is more than twice as many objectives for Sparsholt to try and achieve. This could be easier for Sparsholt to do though as it's a much smaller company and therefore changes would be easy to change and results would be more visible. ...read more.

I found a difference about the two companies about their location and history. In recent years Russ Berrie has had to move because of financial difficulty in contrast to this though Sparsholt has not had to move recently or ever since the business opened many years ago, as they have had no serious financial trouble which has forced them to do so. A similarity between the two companies that I found is that Russ Berrie is a retail company to its clients in the Uk and abroad and so is Sparsholt to its only customers Watsons, however a difference is that Russ Berrie sells products to all over the world and to many difference clients whereas in contrast Sparsholt only distributes products to the one customer and is that is located in the same country and county. Another similarity between the companies is that in recent year's events have taken part it the companies day to day running. For example the foot and mouth outbreak in 2001 which was one of the worst outbreaks in recorded history which fortunately didn't effect Sparsholts cows but has caused Sparsholt and other farms to change hygiene procedures, in comparison to the recent foot and mouth events Russ Berrie has had its own problems with Carte Blanche, this rival company has had to force Russ Berrie into thinking of new ideas and new products in order to stay in the market, which in turn has near totally changed the company. ...read more.