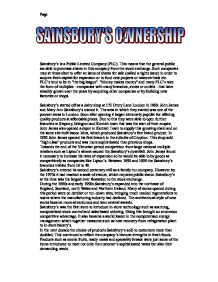 Sainsbury's is a Public Limited Company (PLC). This means that the general public are able to purchase shares in this company from the stock exchange. Such companies may at times elect to offer an issue of shares for sale (called a rights issue) in order to acquire fresh capital for expansion or to fund new projects or takeover bids etc. PLC's tend to be in "the big league". "Money makes money" and many PLC's take the form of multiples - companies with many branches, stores or outlets - that have steadily grown over the years by acquiring other companies or by building new factories or shops. Sainsbury's started off as a dairy shop at 173 Drury Lane London in 1869. John James and Mary Ann Sainsbury's owned it. ...read more.

In 1882 John James opened his first branch in the suburbs of Croydon. This shop sold "high class" products and was more sophisticated than previous shops. Towards the end of the Victorian period competition from large national multiple retailers such as Lipton's almost caused the Sainsbury's downfall. John James found it necessary to increase his rates of expansion so he would be able to by goods as competitively as companies like Lipton's. Between 1890 and 1900 the Sainsbury's branches trebled from 16 to 48. Sainsbury's entered its second centenary still as a family run company. However by the 1970s it had reached a scale of stature, which required public status. ...read more.

Using this brought an enormous competitive advantage. It also became a world leader in the computerised energy management which together measures such as heat recovery from refrigeration plant to in-store bakery's. In the next decade the choice of products Sainsbury's sold to customers more than doubled. This continued to reflect the company's historic strengths in fresh foods. Products such as exotic fruits, ready meals and speciality breads were just some of the items introduced to meet not only the customer's sophisticated tastes but also their demanding needs. By the end of Sainsbury's 125th year it had over 355 stores nationwide. In more recent years it has expanded to the USA, where it acquired the New- England based Shaw's Supermarket Ltd. In 1997 it also established Sainsbury's bank and in 1995 the first British supermarket company to offer goods directly from the Internet. Page ...read more.