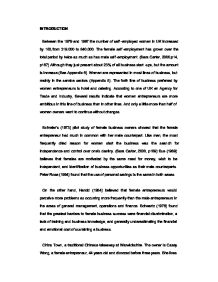 INTRODUCTION Between the 1979 and 1997 the number of self-employed women in UK increased by 163,from 319,000 to 840,000. The female self-employment has grown over the total period by twice as much as has male self-employment. (Sara Carter, 2000,p14, p167) Although they just present about 23% of all business start-ups, but the amount is increase (See Appendix 6). Women are represented in most lines of business, but mainly in the service sectors (Appendix 5). The forth line of business preferred by women entrepreneurs is hotel and catering. According to one of UK an Agency for Trade and Industry, Several results indicate that women entrepreneurs are more ambitious in this line of business than in other lines. And only a little more than half of women owners want to continue without changes. Schreier's (1973) pilot study of female business owners showed that the female entrepreneur had much in common with her male counterpart. Like men, the most frequently cited reason for women start the business was the search for independence and control over one's destiny. (Sara Carter, 2000, p169) Sue (1989) believes that females are motivated by the same need for money, wish to be independent, and identification of business opportunities as their male counterparts. Peter Rose (1994) found that the use of personal savings is the same in both sexes. On the other hand, Harold (1984) believed that female entrepreneurs would perceive more problems as occurring more frequently than the male entrepreneurs in the areas of general management, operations and finance. Schwartz (1976) found that the greatest barriers to female business success were financial discrimination, a lack of training and business knowledge, and generally underestimating the financial and emotional cost of sustaining a business. China Town, a traditional Chinese takeaway at Warwickshire. The owner is Casey Wong, a female entrepreneur, 44 years old and divorced before three years. She lives with her only son who aged 12 years old. ...read more.

It also influences their marketing strategies. Usually, they will use the word-of mother as the major advertising tool, because it is lower or none cost. Stable/carefully to expend Some research interview by Agency for Trade and Industry shows that, women entrepreneurs in hotel and catering in relation to those active in business service are more often dissatisfied with the profits of their business - even more often than the male entrepreneurs in the same line of business. More than 70 per cent of the women find that the profits are too small. On the contrary, the profits of China Town are stable and a little bit increasing from 2000-2003; Casey said she was very satisfied by herself, because the unique objective for her life is "Stable". She said as the special situation for the takeaway business, China Town has stable customer group and no need to attract any other new customers. Moreover, this kind of business is less change and no need to creation and innovation. In fact, Casey has fully ability to expend two or more takeaway in other area, but she says she won't has the enough time to take care of her son and she didn't want the life just like a machine. For instance, the opening time of takeaway is 5:30PM, Casey can arrange everything before 5PM, which is flexible time can be controlled, such as send-off her son in the morning and back home together before 5pm. She satisfied with her currently earning and enough to live with her son controllable and enjoyable. Harold (1984) said successful entrepreneurs also are characterized as being able to monitor the environment and a being willing to accept innovations necessary to adapt their organizations to changes in the environment. Compare with male-owned business, most of them are willing to change and face to more risks, because it's more challengeable. The man also has the ambition to expend their business as fast as possible. ...read more.

Women business owner in UK, Center for the firm, entrepreneurship and management, www.marketing.strath.ac.uk 18. U.K and Sweden promote female entrepreneurship, 7 Feb 2001, www.nds.coi.gov.uk 19. Unequal entrepreneurs: Why female enterprise is an uphill struggle, 18 Oct 2001, www.hrmguide.co.uk 19. http://www.efs.dk/publikationer/ j APPENDIX 1. Source from: p11, Enterprise and small business 2. Interview questions: 3. Alex The good points about living in a Takeaway is that A. It is very peaceful. A. When you are doing your homework nothing can disturb you. A. You can ask for free food when you are hungry instead of buying the food from local supermarkets. The bad points about living in a Takeaway is that A� There are no any places to play for example, big parks with swings. A� There are no any friends from your local school to come and visit you A� And it is too long to drive from home to school and from school back to home. It is also very tiring for my mum because she finishes work very late and she dose not get much sleep so I appreciate her hard work very much and I need to repay her with very good marks and test results and try not to get her in a bad mood! 4. Professional support Luckily there is already some help out there for women. For example the dedicated website for female entrepreneurs everywoman.com works closely with leading industry experts and professionals to find ways to give information, advice and help to equip their members with the tools needed to start or grow a business. It works both on and off line with companies like IBM, NatWest Bank and BDO Stoy Hayward who support the site. It also has a free reference library and bulletin boards so that members can discuss the latest issues that are affecting their businesses. 5, Newly established business distributed by lines of business 1997----women entrepreneurs Newly established business distributed by lines of business 1997----male entrepreneurs 6, Self-employment in UK 1990-1999 by Gender 7 Female share(%) of self-employment in UK regions 1990-1999 ...read more.