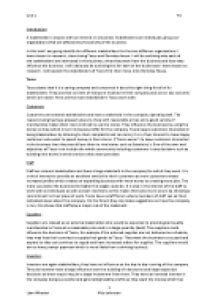 Stakeholders of Tesco and Demelza house

﻿Unit 1 P2 Introduction A stakeholder is anyone with an interest in a business. Stakeholders are individuals, groups or organisations that are affected by the activity of the business. In this task I am going identify the different stakeholders for the two different organisations I have chosen to research, them being Tesco and Demelza house. I will be outlining why each of the stakeholders are interested in the business, what they want from the business and how they influence the business. I will obviously be outlining this for both of the businesses I have chosen to research. I will explain the stakeholders of Tesco first then move onto Demelza House. Tesco Tesco states that it is a caring company and concerned it does the right thing for all of its stakeholders. They promise to listen of everyone involved in their company and act on any concerns which are raised. Here are the main stakeholder?s Tesco work with: Customers Customers are external stakeholders and have a stakehold in the company operating well. The reasons being having a pleasant place to shop with reasonable prices and a good variety of merchandise makes them more inclined to use the stores. They influence the business by using the stores to shop which in turn increases profits for the company. Tesco keeps customers interested in being stakeholders by listening to their complaints and concerns; it is in their interest to have happy customers who want to spend money in their stores. ...read more.

The community would have a say in the running of a store like Tesco with things such as noise, for example late night deliveries and work expansion projects. Local people within the community who enjoy the experience of shopping at Tesco would increase sales for them by recommending the store to family and friends. Tesco also plays an active role in community projects such as computers for schools which improves their aim to be a respected company within the local community. Employers The employers of Tesco are internal. Tesco invest a lot of time in employing the right people for their broad range of roles. They want to expand their business and put a lot of time and energy into choosing the correct people which is obviously very important for Tesco. They want to employ people who have the best interest of the company in mind and will commit to making Tesco a success. Once employed Tesco as an employer offer training to improve their employee?s full potential and offer promotion to conscientious employees. Tesco?s core element of their business is quoted as ?applying a collective knowledge to meet customers changing needs?. This supports the effectiveness of employing the right people for the job as this creates success for the store. Trade unions Trade unions are an external organisation not connected to Tesco in anyway, they are purely there to support employees and staff. Employees of Tesco can if they want to become members of a trade union. ...read more.

Suppliers The suppliers sometimes donate equipment and supplies to enable the charity to operate efficiently. They can influence the running of the charity if the equipment is faulty or very expensive. If supplies are delayed in delivery this can also have an adverse effect on the running of the charity and the services it aims to provide. The suppliers have little interest in the success of the charity as goods are ordered in small and intermittent quantities, although it could increase their standing in the community if goods are donated. Patrons Patrons are indirect stakeholders who raise the profile of the charity. They help with fundraising and sometimes have an interest in a particular charity having had a relative or friend who has needed support from the charity to which they are a patron. They want see the charity succeed its aims and objectives so they can provide a good service to many more people the trustees can influence this success just by lending their name to the charity. Trustees The trustees are direct stakeholders, they offer their skills and influence to the charity. The board of trustees help select members of the management team to work at the charity; they are made up of professional people many holding OBEs from all walks of life such as financial investors, doctors, and former diplomats. They offer their services so the charity can operate as efficiently as it can, they can influence who works there and which services if offers so they probably are the most influential people involved with the Demelza House. Liam Wheeler Miss Johnston ...read more.