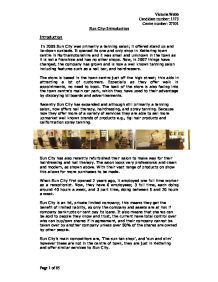 Sun City-Introduction Introduction In 2005 Sun City was primarily a tanning salon; it offered stand up and lie-down sunbeds. It opened its one and only shop in Kettering town centre in Northamptonshire and it was small and unknown in the town as it is not a franchise and has no other shops. Now, in 2007 things have changed, the company has grown and is now a well known tanning salon including features such as a nail bar, and hairdressers. The store is based in the town centre just off the high street; this aids in attracting a lot of customers. Especially as they offer walk in appointments, no need to book. The back of the store is also facing into the town centre's main car park, which they have used to their advantage by displaying billboards and advertisements. Recently Sun City has expanded and although still primarily a tanning salon, now offers nail therapy, hairdressing, and spray tanning. Because now they offer more of a variety of services they are able to sell more upmarket well known brands of products e.g., tigi hair products and californiation spray tanning. Sun City has also recently refurbished their salon to make way for their hairdressing and nail therapy. The salon looks very professional and clean and modern, as shown above. With their vast range of products on show this allows for more purchases to be made. When Sun City first opened 2 years ago, it employed one full time worker as a receptionist. Now, they have 6 employees; 3 full time, each doing around 40 hours a week, and 3 part time, doing between 5 and 20 hours a week. Sun City is an ltd, private limited company; this means they get the benefit of limited liability, so only the company and assets are at risk if company bankrupts or cant pay its loans. It also means that shares can be sold to people they know and trust, the current have total control over who can ...read more.

Sun City is placed off a side road of the main street in kettering town, this is a good location as is it in the town centre so easily reachable by all. The managers have realised that being off a side road means they are hidden from most passing trade, however it is very good that they have put up billboards and posters advertising their whereabouts, I think this is all they could do other than moving to benefit them regarding their location. Do you think tanning in a bottle or 'fake tan' is a competitor with the sunbed industry? Ummm, I wouldn't necessarily say so no, but they do attract a lot of customers, but they are never permanent, I think that is what people love about the sunbeds, every few minutes under a sunbed is equivalent to an hour in the sun, it lasts much longer, and there is no risk of the orange colour you sometimes get from fake tan and looks completely natural. Also it works out so much more expensive for fake tans, the only thing which is turning people is the constant health warnings against sunbeds, it makes people think twice. the manager of Sun City has said that fake tan does not pose a major threat to the sunbed industry or to them themselves they can also pinpoint why sunbeds are better than fake tan, e.g. orange colour, price, how realistic. This is obviously good for them, it is also good that the manager realises that the constant health warnings given by most experts etc are making people think twice about using sunbeds however the manager has not said anything about the a solution to the problem. How do you budget for everything your company, do you use any specific methods or anything? To be honest we don't really budget for different things, our company is so small that we don't need to, we generally just decide at the beginning of each month what needs to be ...read more.

This in all will attract more customers, and stop existing customers being deterred. Evaluation The problem I was looking at regarding Sun City was 'the impact of negative publicity in the media on the use of sunbeds.' I discovered that there was quite a significant problem and that the majoprity of people think twice before using sunbeds because of the negative publicity. I have researched using questionnaires and interviews, I came to the conclusion that it was one of Sun Citys main problems and in order for them to fix it, Sun City need to sort out their budgets and market segmentation etc to allow sufficient funding and resources to promote sunbeds at Sun City and counteract the negative exposure with positive things, benefits etc. Overall, the information that I researched was sufficient to analyse Sun Citys position and to make suggestions on how to potentially solve, if not better the problem. I think the most effective information was the customer questionnaire as it allowed me to get an insight to what customers thought of Sun City etc. ths managers interview was good and beneficial to me as I found ot information I would not know otherwise however the answers I received were slightly vague. Thay were detailed enough to give me a rough idea where Sun City stands e.g. regarding budgetng, promotion, products pricing etc however there were no specific details regarding finances or exact numbers of their current customers base so I am currently unable to set objectives for Sun City to aim for as I have nothing to measure. If I was going to do my investigation again I would ask questions which would give me more detailed answers regarding the managers interview, so I could conclude more thoroughly and therefore give more detailed specific recommendations. I do however feel than the suggestions I have made would benefit Sun City in solving their problem of negative media exposure about sunbeds. ?? ?? ?? ?? Victoria Webb Candidate number: 1173 Centre number: 27101 Page 1 of 85 ...read more.