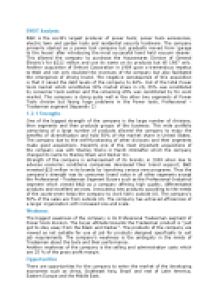 Swot analysis of Black and Decker.

﻿SWOT Analysis: B&D is the world?s largest producer of power tools; power tools accessories, electric lawn and garden tools and residential security hardware. The company primarily started as a power tool company but gradually moved from ?garage to the house? after introducing the most successful hand held vacuum cleaner. This allowed the company to purchase the Housewares Division of General Electric?s for $212 million and use its name on its products but till 1987 only. Another acquisition of Emhart Corporation in 1989 gave a tremendous impetus to B&D and not only doubled the revenues of the company but also facilitated the emergence of strong brand. The negative consequence of this acquisition is that it raised the debt levels of the company to 84%. ...read more.

Strength of the company is enhancement of its brands, in 2009 when due to adverse economic conditions companies decreased their brand support; B&D invested $20 million in its brands by launching various new programs. Thus the company?s strength was its consumer brand value in all other segments except the Professional ?Tradesman Segment Buyers such as the Professional-Industrial segment which viewed B&D as a company offering high quality, differentiated products and excellent services. Innovating new products according to the needs of the countrymen helps the company to work fairly outside US. The company?s 50% of the sales are from outside US. The company has achieved efficiencies of a larger organization with increased size and scale. Weakness The biggest weakness of the company is its Professional Tradesman segment of Power tools division. ...read more.

B&D by taming the weaknesses of its competitor Makita can capture the retailers market such as by offering channel protection and to produce the goods in a slightly different color than Makita. Threat The biggest threat to the company is from its strongest competitors, Makita and Milwaukee which satisfies the consumers a lot and at the same time offers a good baseline options in major categories. The strategy of the company was well planned, even if the company is priced at a premium from B&D; some of the products are priced at a much lower price than the price charged by the company in its home country. The biggest question posed in from of the company is that how the company is a foreign country is able to offer goods at a lower price than B&D to which US is its own nation. The company also faces tough competition from the company Skil due to its strong particular product ...read more.