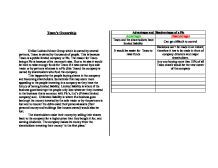 Tesco's Ownership Unlike Lakhani Motor Group which is owned by several partners, Tesco is owned by thousands of people. This is because Tesco is a public limited company or Plc. The reason for Tesco being a Plc is because of its mammoth size. Due to its size it would be hard to raise enough funds for Tesco if it was owned by a sole trader or by partners whereas in a Plc (like Tesco) the company is owned by shareholders who fund the company. This happens by the people buying shares in the company and becoming shareholders. Sometimes this may seem more appealing to the people investing in a company as they have the luxury of having limited liability. Limited liability is where if the business goes bankrupt the people only lose whatever they invested in the business this is common with Plc's, Ltd's (Private limited company) and . ...read more.

Any one buying more than 51% of all Tesco shares would be the new owner of the company Aims: Aims are set out to briefly describe what has to be done. Tesco's aims are set out below -: Objectives: Objectives are related to aims but present more information by maybe including a time period and percentage (%). Tesco's objectives are listed below -: Marketing - This department is responsible for controlling the sales of the product and actually putting it on the market to sell. They also carry out market research to compare and be competitive with other products which are similar on the market. They are also responsible for promotions of sales therefore they need to have a decent product on the market which is different from others and has a good chance of beating other sales. ...read more.

In this report I intend to create a detailed report of Tesco's. I want to see what they have done to get to where they are today and to try to evaluate why what they did worked. I want to get as much information as possible, although some information may not be accessible to the public as it could be sensitive. After the First World War, Jack Cohen received a �40 gratuity. With this he set up his own East end fruit and veg store. Later he joined with another man T. E Stockwell to create a partnership. They then formed a limited company and now Tesco is a public limited company (PLC) with an annual turn over of around �30,814 million pounds. When Cohen set up Tesco, he was a sole trader, he would have had unlimited liability. This means that if he went bust and unable to pay his debts he would have his personal belongings sold by the bank to pay off his debts. ...read more.

*** This report is a mix of researched information and supposition but the writer does not state which is which. There are several inaccuracies and a misunderstanding of public limited companies.