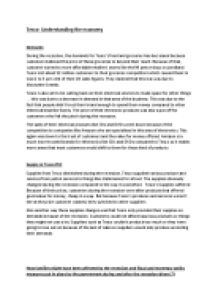 Tesco- Understanding the economy and its effects on the business.

﻿Tesco- Understanding the economy Demands During the recession, the demands for Tesco?s food and groceries has decreased because customers believed the price of these groceries to beyond their reach. Because of that, customer turned to more affordable retailers? stores like the 99 pence shop or pondland. Tesco lost about 22 million customers to their groceries competitors which caused them to lose 2 to 3 per cent of their UK sales figures. They claimed that this lost was due to discounter brands. Tesco is also set to be cutting back on their electrical services to make space for other things ? this was due to a decrease in demand in that area of the business. This was due to the fact that people didn?t trust their brand enough to spend their money compared to other electrical brad like Sonny. The price of their electronic products was also a put off for customers who felt the pinch during the recession. ...read more.

So instead of enjoying expensive holidays to other countries now and then people just stayed in the UK and go on family trips to places like haven. Some people starting cutting back on luxury stuff like expensive cars and switching to cheaper and stable cars in order to spend less Also most people during the recession were shopping around and to find the cheapest products and the one that offered good value for money. This cased businesses like Tesco to lose out to competitor such as Aldi who offered much cheaper products which fitted the pockets of customers The government took measures such as monetary and fiscal policies, the aims of these policies were to keep inflation levels as low as possible, maintain the positive growth of the economy (this is close to 2.5%). Also these policies aimed to provide full employment and reduce cyclical fluctuations in the economic cycle One of the key factors leading to the recession was increasing unemployment, as know unemployment is bad for the economy because it causes the government to spend more and reduces fund for other important things. ...read more.

Currently Tesco operates in 11 different countries in some of which they have obtained full ownership of business which means that they were fully allowed to establish themselves in these countries. In others not so much, Tesco wasn?t given full ownership in some of the countries where the currently operate but instead they were allowed to cooperate with other companies within these countries. For example in India, Tesco was given only part of an ownership which means they had to cooperate with another company if they wanted to stay and operate in India. Because growth of businesses in the UK are regulated is always regulated by the (CMA) for the benefits of consumers, other businesses and the economy, businesses like Tesco can?t go any bigger than they already are even if they wanted to. Du to this, businesses are forced to go compete in other countries where they can actually expand further and achieve their aims. By operating abroad, Tesco reduces the ability of the government to regulate them in ways like building more partnership to expand. http://www.dailymail.co.uk/news/article-1091079/Recession-hits-Tesco-Grocery-giants-sales-fall-lowest-figure-16-years-shoppers-turn-budget-supermarkets.html ...read more.