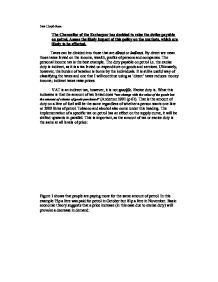 The Chancellor of the Exchequer has decided to raise the duties payable on petrol. Assess the likely impact of this policy on the markets, which arelikely to be affected.

Ivor Lloyd-Rees The Chancellor of the Exchequer has decided to raise the duties payable on petrol. Assess the likely impact of this policy on the markets, which are likely to be affected. Taxes can be divided into those that are direct or indirect. By direct we mean those taxes levied on the income, wealth, profits of persons and companies. The personal income tax is the best example. The duty payable on petrol i.e. the excise duty is indirect, as it is a tax levied on expenditure on goods and services. Ultimately, however, the burden of taxation is borne by the individuals. It is still a useful way of classifying the taxes and one that I will continue using as 'direct' taxes reduces money income; indirect taxes raise prices. VAT is an indirect tax, however, it is not specific. Excise duty is. What this indicates is that the amount of tax levied does "not change with the value of the goods but the amount of volume of goods purchased" (Anderton 1991 (p 61). That is the amount of duty on a litre of fuel will be the same regardless of whether a person wants one litre or 5000 litres of petrol. Tobacco and alcohol also come under this heading. The implementation of a specific tax on petrol has an effect on the supply curve, it will be shifted upwards in parallel. ...read more.

In order to compensate for this, prices for the goods sold will have to increase and be passed on to consumers. However, the British manufacturing industry has been in decline over the last 30 years. One reason is its failure to compete on world markets. If the Chancellor of the Exchequer decides to keep on increasing the excise duty on all forms of petrol then the result could be a further reduction in its' share of world exports and therefore a subsequent decline in output. A decline in output would lead to unemployment and a cycle of deprivation. This is, of course, a generalization. However, some truth does come out of this statement It would be unwise for the statutory incidence of tax to be on the producer of a good as excise duty is raised (on average) by 6p a year. We can say that for any given product there is a distribution of the tax burden after the imposition of an indirect tax: Consumers' share of tax burden = Elasticity of Supply Producers' share of tax burden = Elasticity of Demand It is possible to say for petrol that if the supply is more elastic than demand, the consumers' share of the tax burden will exceed the producers' share. The simple economic theory dictates that an increased cost to make a product leads to an increase in its price. ...read more.

People need cars to communicate and until public transport becomes more reliable and cheaper then the public has no other alternative than to use their car. It is a necessity. The government can impose excise duties on petrol and get away without demand for petrol decreasing by a significant amount. Excise duties, therefore, are levied on imported goods (and domestic goods) with the aim of raising revenue. Of the duties on tobacco and alcohol a lot is raised by taxing petrol. The large sums raised from sales of petrol indicate that demand for them is relatively inelastic. It is true to say that in the last year increases in price caused by higher excise duty have had little impact on consumption. An increase in the taxes on petrol will influence the type of petrol people buy but will not affect the demand for petrol overall. Petrol prices affect haulage markets. They need to be competitive due to the threat from Europe (including cheaper petrol prices) but how much of the price increase they absorb, as discussed, will depend on economies of scale. The government needs to take into consideration the cost to society of petrol. It is harmful so needs to be taxed but the revenue raised is substantial. This can go towards expenditure like NHS funding (which was �54 billion last year. Either way an increase in petrol duties will have profound effects above and beyond a person paying a few pounds more at the petrol pump. ...read more.