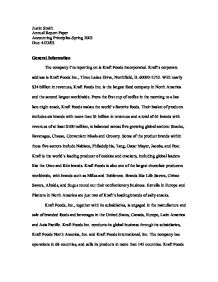 Justin Smith Annual Report Paper Accounting Principles-Spring 2003 Due: 4/23/03 General Information The company I'm reporting on is Kraft Foods Incorporated. Kraft's corporate address is Kraft Foods Inc., Three Lakes Drive, Northfield, IL 60093-2753. With nearly $34 billion in revenues, Kraft Foods Inc. is the largest food company in North America and the second largest worldwide. From the first cup of coffee in the morning to a last late-night snack, Kraft Foods makes the world's favorite foods. Their basket of products includes six brands with more than $1 billion in revenues and a total of 61 brands with revenues of at least $100 million, is balanced across five growing global sectors: Snacks, Beverages, Cheese, Convenient Meals and Grocery. Some of the product brands within these five sectors include Nabisco, Philadelphia, Tang, Oscar Mayer, Jacobs, and Post. Kraft is the world's leading producer of cookies and crackers, including global leaders like the Oreo and Ritz brands. Kraft Foods is also one of the largest chocolate producers worldwide, with brands such as Milka and Toblerone. Brands like Life Savers, Cr�me Savers, Altoids, and Sugus round out their confectionery business. Estrella in Europe and Planters in North America are just two of Kraft's leading brands of salty snacks. Kraft Foods, Inc., together with its subsidiaries, is engaged in the manufacture and sale of branded foods and beverages in the United States, Canada, Europe, Latin America and Asia Pacific. Kraft Foods Inc. conducts its global business through its subsidiaries, Kraft Foods North America, Inc. and Kraft Foods International, Inc. The company has operations in 68 countries, and sells its products in more than 145 countries. Kraft Foods North America operates in the United States, Canada and Mexico, and manages its operations by product category, while Kraft Foods International manages its operations by geographic region. Kraft Foods North America's reportable segments are Cheese, Meals and Enhancers; Biscuits, Snacks and Confectionery; Beverages, Desserts and Cereals, and Oscar Mayer and Pizza. ...read more.

Most Significant Debt Items The most significant debt item the company has is the debt that came with the acquisition of Nabisco. The Company had to use notes in order to obtain Nabisco. The company financed the acquisition through the issuance of two long-term notes payable to Philip Morris totaling $15 billion. As mentioned earlier, the Company has started paying off a significant portion of notes payable in 2001. The Company's total debt was $16 billion, $25.826 billion, $7.828 billion, and $7.168 billion in 2001, 2000, 1999, and 1998, respectively. There is a big increase in total debt from 1999 to 2000. This is due to the acquisition of Nabisco in 2000. The debt was cut by almost $10 billion in 2001. As mentioned earlier, On June 13, 2001, the Company completed an initial public offering ("IPO") of 280 million shares of its Class A common stock at a price of $31.00 per share, The IPO proceeds, net of underwriting discount and expenses, of $8.4 billion were used to retire a portion of an $11 billion long term note payable to Philip Morris incurred in the connection with the acquisition of Nabisco. This was the big reason for the decrease in total debt from 2000 to 2001. Solvency Solvency ratios measure the ability of the company to survive over a long period of time. Long-term creditors and stockholders are particularly interested in a company's ability to pay interest as it comes due and to repay the face value of debt at maturity. Debt to total assets and cash debt coverage are two ratios that provide information about debt-paying ability. Debt to total assets ratio measures the percentage of the total assets provided by creditors. It is computed by dividing the total debt (both current and long-term liabilities) by total assets. This ratio indicates the company's ability to withstand losses without impairing the interests of creditors. ...read more.

Some of the product brands within these five sectors include Nabisco, Philadelphia, Tang, Oscar Mayer, Jacobs, Post, Oreo, Ritz, Milka, Toblerone, Life Savers, Cr�me Savers, and Altoids. This to me is just amazing. That one corporation can produce so many products and I personally consume almost all these products on a regular basis. So this is what interested me the most, and hence this is the reason why I choose Kraft Foods for my project. The thing I liked least about my company was how they put together some of the aspects of their annual report. Everything was very straightforward except for the balance sheet. They didn't do a very good job of describing the inventory method they used and why, as well as describing the method of depreciation they used and why. I thought these were very important concepts and I wanted to know about them. I used other sources instead of the annual report to find the answers I wanted. Other than that I liked the company and their operations very much. I found Kraft Foods to be very interesting and I also found this project to be very beneficial in understanding accounting principles. Learning from the textbook and on the chalkboard is one thing, but going out and actually putting the concepts I learned from class to use is much more beneficial. If I had $20,000 to invest, I would want to invest in a company that has been around and proven themselves. I am not much of a risk taker so I would only invest in situations where I feel the company has proven to be successful time and again. I would look at certain types of data to help me make my decision, like the company's trend in revenue, net income, EPS, return on assets, profits margins, liquidity ratios, dividend policies, stock options, significant debt items, the company's book value, and stock prices. This project has helped me learn how to find at and interpret all these factors. ...read more.