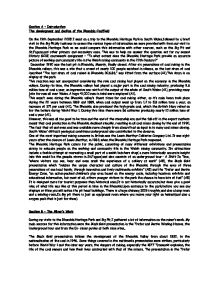 The development and decline of the Rhondda Coalfield

Section A - Introduction The development and decline of the Rhondda Coalfield On the 19th September 2005 I went on a trip to the Rhondda Heritage Park in South Wales,followed by a breif visit to the Big Pit.My task was to assess the various types of information we were provided with from our visit to the Rhondda Heritage Park so we could compare this information with other sources, such as the Big Pit and St.Fagans,and other primary and secondary ones. This was to help me answer the question set for my second History GCSE coursework assignment - "To what extent does the Rhondda Heritage Park provide an accurate picture of working and community life in the Welsh mining community in the 20th Century?" December 1990 saw the last pit in Rhondda, Maerdy, finally closed. After six generations of coal mining in the Rhondda valleys, this was a site that a crowd of nearly 100 people watched in silence, as the last dram of coal inscribed "The last dram of coal raised in Rhondda 30.6.86," was lifted from the surface (A1).This dram is on display at the park. This reaction was not unexpected considering the role coal mining had played on the economy in the Rhondda valleys. During its time, the Rhondda valleys had played a major part in the coal mining industry, producing 9.6 million tons of coal a year, an impressive one-sixth of the output of the whole of South Wales (A1), providing many jobs for men all over Wales. A huge 41,000 men in total were employed (A1). This wasn't even during the Rhondda valley's finest times for coal mining either, as it's main boom took place during the 20 years between 1869 and 1889, when coal output went up from 1.2 to 5.8 million tons a year, an increase of 371 per cent (A1). The Rhondda also produced the high-grade coal, which the British Navy relied on for the boilers during World War 1. ...read more.

I feel the tours were probably the places where I learnt the most about mining. This is because I was able to visually see what the conditions down a mine would have been like,more so in Big Pit, even though I am aware the conditions were actually a lot worse during the time of coal mining, I was provided with a vague insight in to what mining would have been like by the guide in Rhonnda heritage park,but given a much more in depth insight into mining at Big Pit. To see whether it was reliable I compared my experience of the miner's work with the film 'The Miner', Big Pit and the description given by the miner guide. We started in the lamp room where we were shown a selection of miner's lamps, varying from ones not so technical, such as the oil lamps, to ones a lot more advanced in technology. We were also told about the safety precautions of the mines. In big pit we were told about safety and searched for flammable items and dry cell battery,as they could ignite whilst down the mine. In both places we were shown a display about the amount of methane gas present,as miners would have to evacuate immediately if levels were over a certain amount(5% roughly). However, we did not carry out many of these precautions and preparations to go on the underground tour. The only preparation we made was putting on a helmet. Compared to in the film 'The Miner' and the procedures at Big Pit this preparation was not accurate, as there was no system of checks and contraband search carried out. Also in the 1950s anyone going down the mines would have had a cap lamp, which we were not provided with. Underground in Rhonnda heritage park,everything was made to resemble the work place in the 1950s, such as, posters/safety notices e.g. ...read more.

I feel this is due to the heath and safety regulations they had to obey when creating the exhibitions on the working condition, such as the underground tour, 'A Shift in Time' an also the fact that Big pit receives government funding,wheres the heritage park does not. I feel very strongly that Big Pit provides a much better insight into the work of the miners in a Welsh mining community and I believe the sources were a lot more reliable. As Big Pit only gave me an insight in to the working conditions in a Welsh mining community, and not the living conditions as well, I managed to compare the information I was provided with on the living conditions from the Rhondda Heritage Park with the Rhyd - y - car cottages and the Gwalia stores at St. Fagans. From this I can positively say that the Rhyd - y - car cottages and the Gwalia stores at St. Fagans are definitely a better source on the living and community life of in a Welsh mining community. Source D1 in the Llanishen High School Resource Booklet quotes - "The Rhondda Heritage Park gives a romanticised mythical view of the valley for which no original has ever existed." To be blunt, I feel that this quote pretty much sums up the Rhondda Heritage Park.It does provide some good information,but is mainly for tourist purposes. The source D2 also quotes that - "The Rhondda Heritage Park, by contrast (to Big Pit), goes for noise and sensual assault." This is also true. I believe that the Rhondda Heritage Park would have been a lot better off if they had kept it simple by not including 'The Journey back to the Surface' and the cheesy sound effects because I feel this was unrealistic and they would have been better off not trying to portray the real life scares of working down the mines and instead, leaving it to peoples imaginations, because simply I feel that you can't completely experience the incidents that occur whilst working in the mines unless you have actually been there and done it. ...read more.