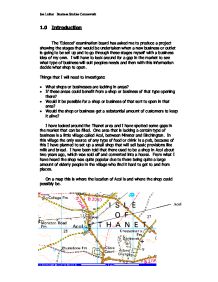 The 'Edexcel' examination board has asked me to produce a project showing the stages that would be undertaken when a new business or outlet is going to be set up and to go through these stages myself with a business idea of my own.

1.0 Introduction The 'Edexcel' examination board has asked me to produce a project showing the stages that would be undertaken when a new business or outlet is going to be set up and to go through these stages myself with a business idea of my own. I will have to look around for a gap in the market to see what type of business will suit peoples needs and then with this information decide what shop to open. Things that I will need to investigate: * What shops or businesses are lacking in areas? * If these areas could benefit from a shop or business of that type opening there? * Would it be possible for a shop or business of that sort to open in that area? * Would the shop or business get a substantial amount of customers to keep it alive? I have looked around the Thanet area and I have spotted some gaps in the market that can be filled. One area that is lacking a certain type of business is a little village called Acol, between Minster and Birchington. In this village the only source of any type of food or drink is a pub, because of this I have planned to set up a small shop that will sell basic provisions like milk and bread. I have been told that there used to be a shop in Acol about two years ago, which was sold off and converted into a house. From what I have heard the shop was quite popular due to there being quite a large amount of elderly people in the village who find it hard to get to and from places. On a map this is where the location of Acol is and where the shop could possibly be. For different sources of information I can consulted many different medium. Some of these are: > Questionnaire. ...read more.

Now that I have looked at all of the arguments that I can look at to try and make up my mind as to whether I am going to be a sole trader or become a partnership, I have decided to be a sole trader. There are a number of different things that influence my business and how it should operate. One of these things is competitors and how I will compete with them. In my situation there are no actual competitors that I have to contend with due to there being no other shop in Acol, but there are competitors that are situated in Birchington and Minster. In these two places there are quite big shops that offer a wide range of goods for the consumer making them quite a good place to go if you have any small shopping needs. Although this may produce a slight problem, I don not think that it will be a particularly big one, because my assumption is that people would prefer to go to a small local shop for their basic supplies, than to go to all the way into a another town to do the same thing. Due to the position of the shop I will also have to consider my pricing because prices often vary according to the area that you are in. For instance, if you were in a garage just outside of Ramsgate and you were to buy a chocolate bar and were to buy one later that day in a service station on the motor way then you would expect to pay more. This is due to the service station being the only place in the area at which you could buy a chocolate bar meaning that they can put the prices slightly up if they wish to. 4.0 Research Objectives and Methodology I have several sources of research that I have used to find out the information that I need to use in my project. ...read more.