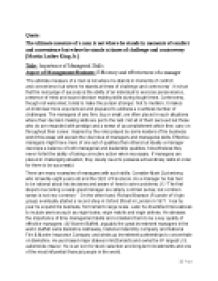 The Importance of Managerial Skills

Top managers always think about the long life of the business. Middle managers perform more using their interpersonal skill. They have to meet many people, so they need interpersonal skills to communicate with people. These managers often take up roles as negotiators. Finally, lower level managers need technical skills in their job. The lower level manager deals with small activities that may lead to achieve the goal and objectives. These three managers must have a good relationship each other, so that the objectives and goals of the firm can be achieved. These are the example of managers at the very highest level, (2) Henry Ford of Ford Motors and (3) Rupert Murdoch Chairman and CEO of News Corporation are excellent examples of top level managers. Apart from the controversies surrounding his corporation, Murdoch, like many others, has served at every level of management. Ford?s understanding of the production process, based on his insights as a lower manager, gave him to ability to refine and improve the production of cars on an unprecedented scale. Such exposure gives top level managers a complete understanding of the functions of a business and this knowledge is essential to ensure the efficiency and productivity of any top level manager. ...read more.

Every manager uses SWOT to overcome his problem in business as he faces the challenges. In the conclusion the key is the effective problem solving ability of managers and their understanding of the conditions of the failure or success of business. All great businesses have gained success by putting their every effort only those companies lead to success which implements on these strategies to be at the top of the competition. (6)Steve jobs the CEO of Apple and Co-founder of Pixar is one of the proofs of the ultimate measures of a man. He got fired by the board of directors at the age of thirty, fired from Apple which was the best thing which happened to him. The time period when he got fired gave him the confidence to face the challenges of world and However he started working from start and in next five years he became the founder of Pixar studio and Next. After few years Apple invited him next and he rejoined the Apple Company. He didn?t lose the faith and belief in himself and through his tough time of controversy, he again became the CEO of Apple Company. This paper as argued that by using the above aspects of management of manager?s roles and managers skills, any man can face the problems through his challenges although he can have the comfort and convenience. ________________ | Page ...read more.