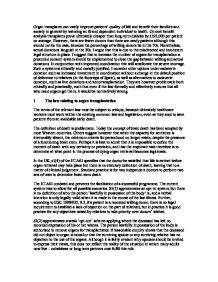 The law relating to organ transplantation

Organ transplants can vastly improve patients' quality of life and benefit their families and society in general by restoring an ill and dependent individual to health. On cost benefit analysis transplants prove ultimately cheaper than long-term dialysis by �191,000 per patient on average. However, there are fewer donors than there are needy patients although this should not be the case, because the percentage of willing donors lie in the 70s. Nonetheless, actual donations languish in the 20s. I argue that this is due to the misdirected and incoherent legal structure in place. I suggest that to increase the number of organs for transplantation a presumed consent system should be implemented to close the gap between willing and actual donations. In conjunction with improved coordination this will ameliorate the severe shortage. Such a system is ethically and morally justified. I consider other options under cadaveric donation such as increased investment in coordination without a change in the default position of deference to relatives (in the footsteps of Spain), as well as alternatives to cadaveric donation, such as live donations and xenotransplantation. They are however problematic both ethically and practically, such that even if the law formally and effectively ensures that all who need organs get them, it would be normatively wrong. 1 The law relating to organ transplantation The terms of the relevant law must be subject to critique, because ultimately healthcare workers must work within the existing common law and legislation, even as they seek to save patients from an avoidable early death. The definition of death is problematic. Today the concept of brain death has been adopted by most Western countries. Others suggest however that when the capacity for sentience is irrevocably absent, the minimum criteria for personhood no longer exists, despite the presence of a functioning brain stem. Perhaps it is best to admit that it is impossible to define the moment of death with any certainty or precision, and that the important task therefore is to determine at what point in the process of dying organ retrieval becomes legitimate. ...read more.

Elective Ventilation of deep coma patients close to death with no possibility of recovery for a few hours to preserve their organs long enough to prepare for their removal after death. A trial held in Exeter in 1988 led to a 50% increase in the number of organs suitable for transplantation, but was halted in 1994 when the Department of Health declared in unlawful, because it was not in the patients' best interests - but whilst of no direct benefit to the patient, it is not contrary to the patient's interests and has the potential to benefit others. Nonetheless, this would still be subject to relatives' vetoes without a systemic revamp. 3 Live Donors Full, free and informed consent necessary because it is not in best interests of the live donor. It is not fully compatible with the traditional Hippocratic oath and its fundamental principle "Primum Non Nocere". To prevent organ sales on pretext of altruistic donation, HOTA89 s2(1)(b) allows only genetically related organ transfers. But why should altruism be limited to the dead? Then again, why should altruism be necessary if there is no problem in the first place? Live donors are indeed an alternative resource to cadaveric donors - but with what incentives? HOTA89 s1 prohibits payment. There are six reasons forwarded against a market in organs. First, many believe there is something intrinsically wrong with commodifying the human body, and that it would be either impossible or degrading to put a value on human body parts. Indeed, human dignity trumps autonomy - if the human body is uniquely valuable and cannot be owned by others or ourselves, it cannot be bought or sold. Second, commercialisation undermines the principle that organ donation should be altruistic. Third, this trade would exploit the poor, and the fact that such markets flourish in developing countries is taken to be evidence that only the poor and marginalized would agree to donate their organs for money - only those who see no other way but sell parts of their body, or would rather sell parts of their body than work. ...read more.

Xenotransplantation offers a real, though currently distant, hope of providing a source of organs for those who urgently require a transplant. Before that hope can become a reality, good medical and scientific progress and also careful, publicly acknowledged safeguards and regulation must be in place. The good news is that the various national authorities and the Council of Europe have established such stringent regulations. This is an excellent example of being proactive rather than simply reactive to new scientific advances. This will prevent the horse from bolting rather than trying to close the stable door after the horse has gone. Religious views Catholics and Protestants advocate prudence, not only because of the ill-defined nature of this new medical adventure but also because of the risks of contamination it may entail. The question of the identity of humankind generally and of particular individuals is on the table and is especially crucial. The question of xenographs in fact pushes to their utmost limits all the ethical problems posed by transplants - powers and limitations of human beings, identity, sense of solidarity and justice. Buddhists are not in favour of xenografts and xenotransplantation but regard them as acceptable in certain circumstances - no commercialism, decent living conditions and treatment for the animal, and the procedure should be regarded as a transitional phase, which should be as short as possible. Judaism takes a pragmatic stance, saying that given the importance attached to life, xenotransplants do not pose any religious problem. It is permissible to save a human life by transplanting animal organs, tissue or cells, especially as there is currently a drastic shortage of human donors - on condition that no unnecessary suffering is caused to the animal. Consideration of physical and psychological impact on recipients of animal organs necessary, but also necessary are further developments in the research field before the full physical impact might be known. Humankind is permitted and even duty-bound to change and improve the world in any way deemed beneficial for humanity. ...read more.