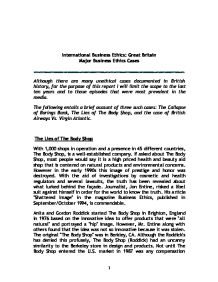 The Lies of The Body Shop.

International Business Ethics: Great Britain Major Business Ethics Cases Although there are many unethical cases documented in British history, for the purpose of this report i will limit the scope to the last ten years and to those episodes that were most prevalent in the media. The following entails a brief account of three such cases: The Collapse of Barings Bank, The Lies of The Body Shop, and the case of British Airways Vs. Virgin Atlantic. The Lies of The Body Shop With 1,000 shops in operation and a presence in 45 different countries, The Body Shop, is a well-established company. If asked about The Body Shop, most people would say it is a high priced health and beauty aid shop that is centered on natural products and environmental concerns. However in the early 1990s this image of prestige and honor was destroyed. With the aid of investigations by cosmetic and health regulators and several lawsuits, the truth has been revealed about what lurked behind the fa�ade. Journalist, Jon Entine, risked a libel suit against himself in order for the world to know the truth. His article "Shattered Image" in the magazine Business Ethics, published in September/October 1994, is commendable. Anita and Gordon Roddick started The Body Shop in Brighton, England in 1976 based on the innovative idea to offer products that were "all natural" and portrayed a "hip" image. However, Mr. Entine along with others found that the idea was not so innovative because it was stolen. The original "The Body Shop" was in Berkley, CA. ...read more.

Although the home office was not concerned with this, a new error account was established with the number 99002. However, Leeson never closed the original error account, 88888, because he was in fact using the error account for his own trading purposes. This was relatively easy for Leeson since the Monetary Authority of Singapore refuses outside regulators permission to inspect the operations of subsidiary banks working on the SIMEX and because the Baring home office had left Leeson and the Singapore group to do their own reconciliation (matching trades and accounts). Leeson had complete control of the daily operations, but how did he get access to so much money? Although discovered after the Bank's collapse, Gordon Bowser, the Derivatives Manager in London, had given full discretion to Leeson to ask for whatever funds he needed to cover margin calls for clients without having to provide any details. A margin call is when you leverage your cash to a point where the exchange requires more capital to insure your solvency to cover your outstanding positions. By having this open doorway to capital, Leeson could create false margin calls and errors in order to fund and support his 88888 account. By the Fall of 1993, Barings' top executives considered Leeson a trading genius because he was reporting incredible profits. In reality, Leeson was taking the trading losses in his secret error account and thereby improving his reported performance. Leeson was promoted to Assistant Director and General Manager and was even given discretion to the time and price of all trades. ...read more.

These fines were quite small in comparison with British Airways' revenue of over 8.6 billion dollars. Please see: http://www.hemscott.com/EQUITIES/company/cd01593.htm The succession plan of management did not change despite suspicion of active involvement in the tactics. During the initial lawsuit, John L. King was President and Chairman of British Airways. He fulfilled his plan to name Sir Colin Marshall as his replacement as Chairman upon his scheduled retirement in July of 1993. Witnesses in trial proceedings actually stated that tactics they had used were known and approved of by management. Marshall continues to sit on the Board today. British Airways lost some of its credibility and damaged some of its future partnerships. When the facts came out, the general public viewed the airline with disdain. The allegations of the unethical practices and the ensuing lawsuits endangered potential partnerships with American Airlines. Eventually, though the partnership culminated. Also, British Airways had to withdraw a bid for a substantial portion of US Airways at one point as well because the United States government would not approve of the deal. Several years later, British Airways formed a partnership with US Airways. See http://flug-revue.com/FRHeft/fr9609e.htm; (Dwyer, Paula. "BRITISH AIR-NOT CRICKET, "Business Week On-line, January 25, 1993.) Today, the companies have what is now known as a friendly rivalry. Several years ago, Martyn Gregory and Nick Rufford wrote a book called "Dirty Tricks: The Inside Story of British Airways Secret War Against Richard Branson's Virgin Atlantic" which told the story about the unfair, unethical, and illegal tactics of British Airways against Virgin. Unfortunately, this book went out of print within weeks of its first publication, and is still extremely difficult to find. Both companies are thriving in today's healthy business climate. Additional resources: www.virgin-atlantic.com www.british-airways.com 1 ...read more.