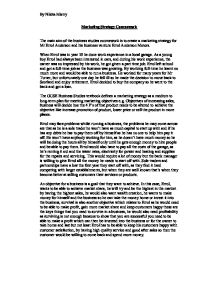 Marketing Strategy Coursework The main aim of the business studies coursework is to create a marketing strategy for Mr Errol Anderson and his business venture Errol Anderson Motors. When Errol was in year 10 he done work experience in a local garage. As a young boy Errol had always been interested in cars, and during his work experience, the owner was so impressed by his work, he got given a part time job. Errol left school and got a full-time job as the business was growing. By working full-time he learnt so much more and would be able to run a business. He worked for many years for Mr Turner, but unfortunately one day he fell ill so he made the decision to move back to Scotland and enjoy retirement. Errol decided to buy the company so he went to the bank and got a loan. The GCSE Business Studies textbook defines a marketing strategy as a medium to long-term plan for meeting marketing objectives e.g. Objectives of increasing sales, business will decide hoe the 4 P's of that product needs to be altered to achieve the objective like increase promotion of product, lower price or sell the product in more places. Errol may face problems whilst running a business, the problems he may come across are that as he is a sole trader he won't have as much capital to start up with and if he has any debts he has to pay them off by himself as he has no one to help him pay it off. He won't have anybody working for him, as he doesn't have much money so he will be doing the hours all by himself only until he gets enough money to hire people and be able to pay them. Errol would also have to pay all the costs of the garage, as he's renting it out and the water rates, electricity for power and heating and supplies for the repairs and servicing. ...read more.

If there is an advert on the radio than people like to paint a picture in their head about the advert, consequently making it more successful. The cost of advertising on the radio can be quite expensive and I have the figures of how much it would cost roughly: A simple advertisement for a small station will usually cost �200-�300. London stations and Digital Stations can cost up to ten times that. The price includes: script writing, audio production, actors to voice the ads, music (if used) and special effects (if used). All of this has to be licensed for broadcast for 12 months from the first time it's played. Aim to spend at least 10% of your budget on the creative - for example... * A �2,500 campaign on a small station over four weeks will probably run with one piece of creative which might cost you �250. * A �25,000 campaign over a year will likely need a few different advertisements. At this level of investment, a jingle or audio identifier would be useful so listeners start to recognise your ads as soon as they hear them. A �250,000 campaign over a year might be worth licensing a famous song for �25,000 so your company really stands out. But listeners may not pay attention to the adverts and if Errol was to get an advert on radio than it will cost him a lot of money and as he's just started the business it could lead him into bankruptcy. Sometimes motor garage ads on the radio aren't as effective as people don't pay attention to what the people are saying and they think that it's boring. Directories Yellow Pages The Yellow Pages is a great place to promote your business, as the Yellow Pages is widely known, loads of people trust it more and as it comes free to your doorstep, every household has one. ...read more.

If Errol used these than his business would expand even more because more people would know about him as business cards get passed on hand in hand. But again he would be harming the environment by wasting trees, so in some ways he shouldn't buy as many business cards, he only needs the local people to know about him so he wouldn't need to use as many trees. Posters Many people would pass posters and would have no reason not to look at them, as they stand out a lot and if Errol had a poster with bold and lively colours on it than he would be attracting a lot of people to look at it and in that sense he would have more customers. His poster should stand out compared to the other posters so they are more attracted to looking at his poster, rather than other businesses. This is also wasting a lot of trees; Errol would need recycled paper to do these unless he only buys some posters. He could maybe buy a few large posters so than he isn't using up much paper. Web Page By having a web page the person would have found you much quicker and the searching is faster. This is efficient for both the people and Errol. This is good for Errol so than he can just change his information around whenever he likes, so if there is a mistake he can correct it, whereas if it were in a book he would have to wait until the new book comes out. The Internet has a wide audience and with that Errol could gain a lot more customers. A financial disadvantage to this is that it could be too expensive for Errol, as you have to pay for it yearly and he may not have that much money to have a web site or put his name on a site like yell.com so he would need to save up some money before he creates a site. ?? ?? ?? ?? By Nikita Mistry ...read more.