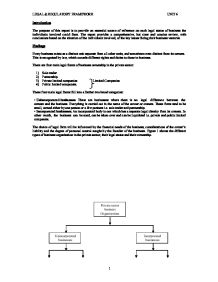 The purpose of this report is to provide an essential source of reference on each legal status of business the individuals involved could form.

Introduction The purpose of this report is to provide an essential source of reference on each legal status of business the individuals involved could form. The report provides a comprehensive, but clear and concise review, with conclusions based on the situation of the individuals involved, of the key issues facing their business ventures. Findings Every business exists as a distinct unit separate from all other units, and sometimes even distinct from its owners. This is recognised by law, which accords different rights and duties to those in business. There are four main legal forms of business ownership in the private sector: 1) Sole trader 2) Partnership 3) Private limited companies Limited Companies 4) Public limited companies. These four main legal forms fall into a further two broad categories: � Unincorporated businesses. These are businesses where there is no legal difference between the owners and the business. Everything is carried out in the name of the owner or owners. These firms tend to be small, owned either by one person or a few partners i.e. sole trader and partnership. � Incorporated businesses. An incorporated body is one which has a separate legal identity from its owners. In other words, the business can be sued, can be taken over and can be liquidated i.e. private and public limited companies. The choice of legal form will be influenced by the financial needs of the business, considerations of the owner's liability and the degree of personal control sought by the founder of the business. Figure 1 shows the different types of business organisation in the private sector, their legal status and their ownership. Figure 1 Business organisations in the private sector Sole Trader In this form of business unit one person provides all the capital and assumes all the risks associated with the business. The owner runs the business and may employ any number of people to help. ...read more.

Each partner is responsible for the entire debts of the partnership, whether they have caused the debt themselves or not. Profits According to the 1890 Partnership Act profits are shared equally. A partnership deed is able to vary this. All the profits go to the owners - the partners. Taxes Partners are classed as being self-employed. Thus they pay National Insurance contributions at the self-employed rate, income tax on the profits of the business and VAT, if the turnover is high enough. Dissolution of Business When a partnership ends, there are a number of formalities to be observed which are set out in the Partnership Act 1890. Subject to agreement between the partners, a partnership can be dissolved: * at the end of a previously agreed fixed term * at the end of what has previously been agreed to be a single undertaking * by one partner giving notice to all the other partners that they wish to dissolve the partnership. In addition, a partnership can be dissolved in the following circumstances: * by death, in a two-partner partnership (in other cases the partnership agreement will normally state the procedure to be followed upon the death of a partner) * by bankruptcy of one of the partners - although the other partners can agree before the dissolution to continue without the bankrupt partner * through the occurrence of an event that makes it unlawful for the business of the firm to be carried on * by order of the court - when a partner becomes in any way permanently incapable of performing their part of the partnership contract * when one partner is guilty of committing an act that brings discredit or bad publicity to the firm * where there are wilful or persistent breaches of the partnership agreement * when the business can only be carried on at a loss * where circumstances have arisen that, in the opinion of the court, make it just and equitable that the partnership be dissolved * where a partner becomes so mentally ill as to be no longer capable of managing their affairs. ...read more.

is distributed to shareholders. The winding up may be compulsory - because the company cannot pay its debts or has failed in its legal duties. Alternatively, the winding up may be voluntary - when the shareholders of a company decide that the company will cease trading. Conclusion John Smith (self-employed plumber) should form the legal identity as a Sole trader. He would control his own business and keep all the profits made by the business. In this form of business one person provides all the capital and assumes all the risks associated with the business. John runs the business and may employ any number of people to help. Success or failure of the business depends entirely on john's head. There are no legal formalities involved in setting up in business as a sole trader. However, under the Business Names Act 1985 a business (irrespective of legal form) using a trade name other than that of the owner. Jane Gregg and Sophia Jenkins (solicitors working together) should form the legal identity as a Partnership. Jane and Sophia can make agreement between themselves to take joint responsibility for the running the business, to share profits and risks. There are no legal formalities to complete when a partnership is formed. Roger Evans, Mark Cooper and Joanna Sims (Computer Software Designers) should form the legal identity, as a Private limited company is one type of limited company. This type of company must include Limited (or Ltd) in its title name. Two to an unlimited number of shareholders owns the company. The capital of the company is divided into shares. Shares can only be transferred 'privately' and all shareholders must agree on the transfer - hence the name 'private'. Shares cannot be advertised for public sale. The private company may restrict share transfer if it wishes by writing a rule into its articles of association requiring members to offer shares to existing shareholders before attempting to sell them to non-members - this way ownership is kept within a particular group of people. ?? ?? ?? ?? LEGAL & REGULATORY FRAMEWORK UNIT 6 1 ...read more.