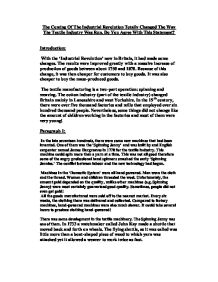 The Coming Of The Industrial Revolution Totally Changed The Way The Textile Industry Was Run. Do You Agree With This Statement? Introduction: With the 'Industrial Revolution' now in Britain, it had made some changes. The results were improved greatly with a massive increase of production of goods between about 1750 and 1870. Because of this change, it was then cheaper for customers to buy goods. It was also cheaper to buy the mass-produced goods. The textile manufacturing is a two-part operation: spinning and weaving. The cotton industry (part of the textile industry) changed Britain mainly in Lancashire and west Yorkshire. In the 19th century, there were over five thousand factories and mills that employed over six hundred thousand people. Nevertheless, some things did not change like the amount of children working in the factories and most of them were very young! ...read more.

In 1733 a watchmaker called John Kay made a shuttle that moved back and forth on wheels. The flying shuttle, as it was called was little more than a boat-shaped piece of wood to which yarn was attached yet it allowed a weaver to work twice as fast. Gradually, the textile industry was developing new ways and inventions. Paragraph 2: Working environments between the 'Domestic System' and the 'Factory System' differed. Firstly, the domestic system was mostly in a small home with very little people working in one house. (E.g. About three people.) The factory system had a large mass and hundreds of people working there. In basically all the houses, (domestic system) it was probably cold therefore there was no central heating then. Nevertheless, in the factories it was very humid and stuffy because there were so many workers. It would also be very loud in the factories. ...read more.