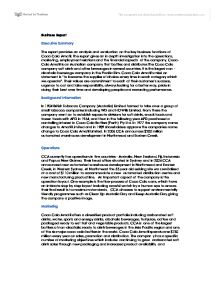 The report provides an analysis and evaluation on the key business functions of Coca Cola Amatil. The report gives an in depth investigation into the operations, marketing, employment relations and the financial aspects of the company. Coca-Cola Amatil is

Business Report Executive Summary The report provides an analysis and evaluation on the key business functions of Coca Cola Amatil. The report gives an in depth investigation into the operations, marketing, employment relations and the financial aspects of the company. Coca-Cola Amatil is an Australian company that bottles and distributes The Coca Cola company soft drink and other beverages in several countries. It is the largest non-alcoholic beverage company in the Pacific Rim. Coca Cola Amatil's mission statement is "to become the supplier of choice every time in each category which we operate". Their values are commitment to each of their customer's success, urgency to act and take responsibility, always looking for a better way, pride in doing their best over time and developing people and rewarding performance. Background Information In 1904 British Tobacco Company (Australia) Limited formed to take over a group of small tobacco companies including WD and HO Wills Limited. From there the company went on to establish separate divisions for soft drinks, snack foods and frozen foods with APD in 1964, and then in the following year APD purchased a controlling interest in Coca Cola Bottlers (Perth) Pty Ltd. In 1977 the company name changes to Amatil Limited and in 1989 shareholders approve the companies name change to Coca Cola Amatil Limited. ...read more.

Product Coca Cola offers a huge amount of choice to potential customers, with a variety of drinks to suit the needs of individuals. CCA uses product differentiation to tailor its beverages to meet the needs of consumers. For example, this has led to the introduction of new soft drink flavours such a Diet Coke with Lemon, Vanilla Coke and Cherry Coke. The introduction of new products has also differentiated CCA's product range from competitors as none of which offer a comprehensive range of flavour choices. Price The soft drink industry is highly competitive and only a relatively small number of businesses account for soft drink sales. In this environment CCA must take into account competitor's prices when setting their own price. The strong brand of CCA soft drinks often allows the company to charge a slightly higher price than its competitors for similar products. Promotion Advertising is a key element in any promotional campaign. While advertisements featuring CCA's products are visible in many forms of media such a television, radio and billboards CCA has little control over these campaigns are these are the sole responsibility of The Coca Cola Company (TCCC). Free samples and product giveaways are another form of promotion that CCA use regularly. ...read more.

The strong result was delivered despite the less favourable consumer environment experienced that year. The brand delivered volume growth of almost 3%, from new pack options including the 450mL grip bottle, portion control packs and frozen coke. In 2006 CCA's managing director, Terry Davis announced three core financial objectives for the company which included earning growth of 10-25 percent per annum, earnings per share growth of 12-15 per cent per annum and return on capital growth of 1-15 per cent per annum. Conclusion Through the use of the four key business functions; operations, marketing, employment relations and financial aspects CCA has developed a successful company that continues to grow. The choice of factory locations has ensured CCA is able to efficiently deliver to its product to distribution channels. CCA's marketing strategy has achieved great results in recent years and the company is the leading carbonated soft drink producer in every country it operates. CCA has also achieved sound financial achievement performance in recent years and the company's management team is continually searching for ways to faster growth and boost profitability. Their swift response to changing influences on employment relations allows CCA to further its organisational goals while maintaining effective employee relationships. Overall, CCA must continue to respond to changing businesses developments to maintain its high success in the future. ?? ?? ?? ?? ...read more.