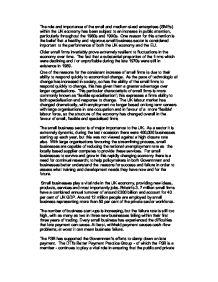 The role and importance of the small and medium sized enterprises (SMEs) within the UK economy.

The role and importance of the small and medium sized enterprises (SMEs) within the UK economy has been subject to an increase in public attention, particularly throughout the 1980s and 1990s. One reason for this attention is the belief that a healthy and vigorous small business sector is considered important to the performance of both the UK economy and the EU. Older small firms invariably prove extremely resilient to fluctuations in the economy over time. The fact that a substantial proportion of the firms which were declining and / or unprofitable during the late 1970s were still in existence in 1989. One of the reasons for the consistent increase of small firms is due to their ability to respond quickly to economical change. As the pace of technological change has increased in society, so has the ability of the small firms to respond quickly to change, this has given them a greater advantage over larger organisations. This particular characteristic of small firms is more commonly known as 'flexible specialisation'; this expresses a firms ability to both specialisation and response to change. The UK labour market has changed dramatically, with employment no longer based on long term careers with large organisations in one occupation and in favour of a more 'flexible' labour force, so the structure of the economy has changed overall in the favour of small, flexible and specialised firms The small business sector is of major importance to the UK. ...read more.

The changes will mean that even more small businesses can benefit from the scheme, making a real difference to those that find it difficult to obtain bank finance. The move will especially help businesses within ethnic minority groups who tend to operate many businesses in the new participating sectors. Dedicate �75 million over 3 years to promoting enterprise education in secondary schools and colleges, following the Davies Report. Help small businesses and intermediaries understand and access different finance options. 'Investment Readiness' demonstration projects are currently being piloted around England. This form of support will be evaluated and, if successful, will be made more widely across England. Introduce a single web portal built around business customer needs, which will bring together information on government services and requirements, and allow businesses to carry out some transactions with the Government online. Introduce tailored enterprise shows, developed with the RDAs and private sector partners, to encourage potential and existing entrepreneurs by bringing together under one roof information on how to start a business. Bring out a new Start-Up Guide, to be launched in Spring next year, which will set out clearly what the legal requirements are for starting a business and give details of resources for support and advice that are available. Work with RDAs in the North West, East Midlands and West Midlands to develop pilots of RDA management and co-ordination of business support services. ...read more.

SMEs, on the other hand, can combine entrepreneurial flair with commercial agility and remain unhampered by major systems integration issues. The US experience has also shown that whilst large corporates 'downsize' and outsource business functions in response to eBusiness, this can be more than compensated for by growth in employment in SMEs, particularly in the business services and hi-tech sectors. SMEs have been the lead eBusiness adopters and the engine for sustained economic and employment growth. In the UK, whilst the economic conditions appear ripe for eBusiness adoption with relatively open markets, start-up incentives and healthy competition, one major factor continues to disadvantage us - attitude. Successive research amongst UK businesses has uncovered low awareness of the likely risks and rewards presented by eBusiness and a 'wait and see' attitude towards adoption - a stark contrast to the more informed and positive attitudes in most other European countries. If unchanged, the UK's refusal to recognise how eBusiness could boost our prospects could seriously harm our global competitiveness. BT shares the desire of the UK Government that British companies, and in particular SMEs, understand and benefit from the opportunities created by eBusiness. BT's vision for eBusiness is: "To lead the development of a flourishing networked economy in which organisations and people communicate, interact and transact electronically, and to guide businesses to grow and benefit from eBusiness" ...read more.