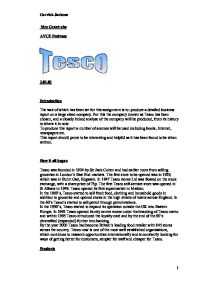 The task of which has been set for this assignment is to: produce a detailed business report on a large sized company. For this the company known as Tesco has been chosen.

Mrs Grant-che AVCE Business 3.02.03 Introduction The task of which has been set for this assignment is to: produce a detailed business report on a large sized company. For this the company known as Tesco has been chosen, and a closely linked analyse of the company will be produced, from its history to where it is now. To produce this report a number of sources will be used including books, Internet, newspapers etc. This report should prove to be interesting and helpful as it has been found to be when written. How it all began Tesco was founded in 1924 by Sir Jack Cohen and had earlier roots from selling groceries in London's East End markets. The first store to be opened was in 1929, which was in Burnt Oak, Edgware. In 1847 Tesco stores Ltd was floated on the stock exchange, with a share price of 75p. The first Tesco self-service store was opened in St Albans in 1948. Tesco opened its first supermarket in Malden. In the 1960's, Tesco started to sell fresh food, clothing and household goods in addition to groceries and opened stores in the high streets of towns across England. In the 60's Tesco's started to sell petrol through petrol stations. In the 1990's, Tesco started to expand its operation outside the UK into Eastern Europe. In 1992 Tesco opened its city centre stores under the branding of Tesco metro and within 1995 Tesco introduced the loyalty card and by the end of the 90's diversified (expanded) further into banking. By the year 2000 Tesco had become Britain's leading food retailer with 845 stores across the country. Tesco now is one of the most well established organisations, which continues to research opportunities internationally and is constantly looking for ways of getting better for customers, simpler for staff and cheaper for Tesco. Products Tesco offer a range of different products, listed below are just some of the products, which are available within each store * Groceries * Tapes, CD's, videos * Electrical goods * Clothing * Butchers * Magazines, newspapers * Drinks * Bakery As well as many others. ...read more.

Tesco has brought in a external company to complete the manufacturing process. They have done this in order to maintain the highest standards of products. Tesco has three different working shifts to make sure that the products are being watched over during the manufacturing stage 24 hours a day. They are always cleaning up the floor and the equipment that has been used. They have people writing reports on the quality of the process and making sure it is always up to standard. They also have Health and Safety people checking the quality. The information from the checks is used to improve performance or to see if it meeting its targets. This will help to meet the needs of the customers by giving them satisfaction. The quality assurance where all the employees in Tesco have the responsibility of all the stages of the production process. This means the employees check the production process and the quality is at a high standard. This means the shift workers will have to make regular checks for the ingredients to be made into health care products. This helps improve the quality of the production at each stage. This means the finished product will reach the customers at the highest quality. When the quality is always high the customers will keep buying from Tesco it will make the market share get higher because they wont lose any customers but gain thought the quality of the products. The quality controlled systems is not just used in the production, its also in the finance department, because they need to make sure that all the money transactions are correct if there not the accounts will go wrong and the overall figures will be inaccurate. Also the marketing department has to make sure that research is accurate because if it is they might not be giving what the customers want. (1) www.tesco.com (2) www............. (1) www.Tesco.com (2) 5 year summary (requested from firm directly) Gerrick Jackson 1 ...read more.