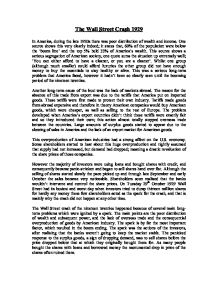 The Wall Street Crash 1929 In America, during the late 1920s there was poor distribution of wealth and income. One source shows this very clearly indeed; it states that, 60% of the population were below the 'boom line' and the top 5% held 33% of America's wealth. This source shows a serious segregation of American society, one quote sums the situation up extremely well; 'You can either afford to have a cleaner, or you are a cleaner'. Whilst one group (although much smaller) could afford luxuries the other group did not have enough money to buy the essentials to stay healthy or alive. This was a serious long-term problem that America faced, however it hadn't been so clearly seen until the booming period of the nineteen twenties. ...read more.

The problem developed when America's export countries didn't think these tariffs were exactly fair and so they introduced their own; this action almost totally stopped overseas trade between the countries. Large amounts of surplus goods started to appear due to the slowing of sales in America and the lack of an export market for American goods. This overproduction of American industries had a strong affect on the U.S. economy. Some shareholders started to hear about this huge overproduction and rightly assumed that supply had not increased, but demand had dropped; meaning a drastic revaluation of the share prices of those companies. However the majority of investors were using loans and bought shares with credit, and consequently became panic-stricken and began to sell shares hand over fist. ...read more.

The Wall Street crash of the nineteen twenties happened because of several main long-term problems which were ignited by a spark. The main points are the poor distribution of wealth and subsequent power, and the lack of overseas trade and the consequential overproduction of goods by American industry. The spark is by far the most important factor, which resulted in the boom ending. The spark was the actions of the investors, after realising that the banks weren't going to keep the market stable. The panicked response to the surplus goods, a sign of dropping demand, was to sell shares before the price dropped below that at which they originally bought them for. As many people bought the shares with loans and borrowed money the monumental drop in price of the shares often ruined them. ...read more.