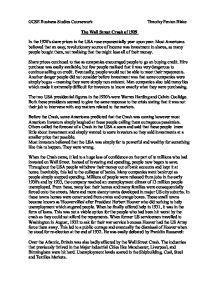 GCSE Business Studies Coursework Timothy Fenton Blake The Wall Street Crash of 1929 In the 1920's share prices in the USA rose exponentially year upon year. Most Americans believed that an easy, revolutionary source of income was investment in shares, so many people bought them, not realising that the might lose all of their money. Share prices continued to rise as companies encouraged people to go on buying credit. Hire purchase was easily available, but few people realised that it was very dangerous to continue selling on credit. Eventually, people would not be able to meet their repayments. Another danger people did not consider before investment was that some companies were simply bogus - meaning they were simply non existent. Man companies also told many lies which made it extremely difficult for investors to know exactly what they were purchasing. The two USA presidential figures in the 1920's were Warren Harding and Calvin Coolidge. ...read more.

Inevitably, this led to the collapse of banks. Many companies went bankrupt as people simply stopped spending. Millions of people were released from jobs in the early 1930's and by 1933, the company reached an unemployment climax of 13 million people unemployed. From these, many lost their homes and many families were consequentially forced onto the streets. More and more shanty towns developed in major US city suburbs. In these towns homes were constructed from crates and orange boxes. These small towns became known as 'Hoovervilles' after President Herbert Hoover who did nothing to help unemployment which angered people. When he finally offered help in 1931, it was in the form of loans. This was not a viable option for the people who had been hit worst by the crash as they could not afford the repayments. When former US servicemen travelled to Washington in August, 1932 to ask for their war service bonuses Hoover had the US Army force them away. ...read more.

The collapse of the British Raw Material Industries named above led to hardship in Cities and Areas where these industries were located. South Wales and Newcastle were particularly affected by the Coal Decline but the most famous example is Jarrow where unemployment is believed to have soared past the eighty percent level at one time. This caused the Famous 'Jarrow to London Hunger March'. Just think, all these terrible consequences simply because bad investors failed to fully understand the terms of their investments. As the Current (2008) Worldwide 'Credit Crunch' starts to gather pace, what can the International Governments and Individuals do to stop the reoccurance of such a Crisis. Well, Making sure you cover the supposedly oncoming recession by generating some additional income is a good idea but always be aware, the best option is to prevent recession in the first place and that just means not being drawn in to the media hype that's many people believe are trying to start one. (815 Words) ...read more.