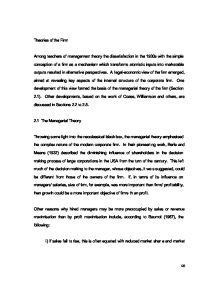 Theories of the Firm

Theories of the Firm Among teachers of management theory the dissatisfaction in the 1930s with the simple conception of a firm as a mechanism which transforms atomistic inputs into marketable outputs resulted in alternative perspectives. A legal-economic view of the firm emerged, aimed at revealing key aspects of the internal structure of the corporate firm. One development of this view formed the basis of the managerial theory of the firm (Section 2.1). Other developments, based on the work of Coase, Williamson and others, are discussed in Sections 2.2 to 2.5. 2.1 The Managerial Theory Throwing some light into the neoclassical black box, the managerial theory emphasised the complex nature of the modern corporate firm. In their pioneering work, Berle and Means (1932) described the diminishing influence of shareholders in the decision making process of large corporations in the USA from the turn of the century. This left much of the decision making to the manager, whose objectives, it was suggested, could be different from those of the owners of the firm. If, in terms of its influence on managers' salaries, size of firm, for example, was more important than firms' profitability, then growth could be a more important objective of firms than profit. Other reasons why hired managers may be more preoccupied by sales or revenue maximisation than by profit maximisation include, according to Baumol (1967), the following: i) If sales fail to rise, this is often equated with reduced market share and market power, and consequently, with increased vulnerability to the actions of competitors. ii) When asked about the way his company performs, an executive would typically reply in terms of what the firm's levels of sales are. iii) The financial market and retail distributors are more responsive to a firm with rising sales. The model developed by Baumol attempts to reconcile the behavioural conflict between profit maximisation and the maximisation of the firm's sales (i.e. ...read more.

Self-enrichment on the part of the manager will increase the company's costs, it will have to charge higher prices or reduce the quality of its products and this will result in a loss of market share. At the extreme, the company will be forced to go out of business, and the manager will lose his job. In this way a competitive product market can generate disincentives to inefficient management. It is possible that all three of these mechanisms either do not operate, or do not operate efficiently in a particular industry. Even in their absence, there are ways of ensuring that the interests of managers (agents) are brought into line with those of the owners (principals) of a firm. We discuss this issue in Section 2.2. 2.2 Principal-Agent Theory1 At its simplest, principal-agent theory examines situtations in which there are two main actors, a principal who is usually the owner of an asset, and the agent who makes decisions which affect the value of that asset, on behalf of the principal. As applied to the firm, the theory often identifies the owner of the firm as principal, and the manager as agent, but the principal could also be a manager, and an employee nominated by the manager to represent him in some aspect of the business could be the agent. In this case the asset, which the agent's decisions could enhance or diminish, is the manager's reputation. To explain the relationship between principal-agent (or agency) theory, and other theories of the firm, we turn to Williamson's (1985, pp.23-29) categorisation of approaches in IO in terms of their views on contracts. There are two main such approaches or branches: monopoly, which views contracts as a means of obtaining or increasing monopoly power, and efficiency, which views contracts as a means of economising. The early work on SCP and particularly on barriers to entry, for example, belong on the monopoly branch of contracts. ...read more.

2 See, for example, the article on the "separation of ownership and control" by Fama and Jensen, 1983. Other important articles on principal-agent theory include Mirrlees, 1976 and Fama, 1980. 3 See, for example, Maskin and Tirole, 1992, who analyse as a three-stage game the relationship between the principal and agent in which the principal has private information that directly affects the agent's payoff. 4 or, to express it in terms closer to those of the theorists in this area, the problem is whether there exists any class of reward schedule for the agent (the manager) such as to yield a Pareto-efficient solution for any pair of utility functions both for the agent and the principal (Aoki, 1984, p.49). 5 An example of moral hazard in employment contracts arises in universities, where there are two different groups of employees, those on short-term contracts, and those with tenure. Tenure is supported by many, and not only those who have tenure(!), as a feature of the independence of the academic, and the need to protect the academic against political pressure. Tenure may perform this function to some extent but it also enables those who have it, to change their behaviour and shirk various duties. The academic on short term contract, it can be argued, works hard, prepares excellent lectures, volunteers for administrative duties, does above average research and publishing. Then he obtains tenure, relaxes more, gives last year's lectures, avoids administration, and does less research and publishing. In practice there is, no doubt, moral hazard in tenure, but given that the best teachers, administrators and researchers in academia have tenure, academics certainly do not always, or even usually, change their behaviour in the way predicted by moral hazard. 6 raised, as we saw in Chapter 2, by Alchian and Demsetz, 1972. 7 quoted in Aoki, 1984, p.26. 8 For a more detailed discussion on the issue of team production and the monitor as owner, see Holmstrom and Tirole, 1989, or at a more introductory level, Douma and Schreuder, 1992, Chapter 6. ?? ?? ...read more.