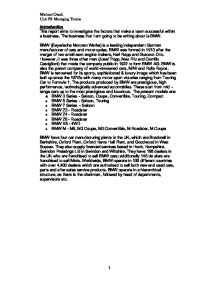 This report aims to investigate the factors that make a team successful within a business. The business that I am going to be writing about is BMW.

Introduction This report aims to investigate the factors that make a team successful within a business. The business that I am going to be writing about is BMW. BMW (Bayerische Motoren Werke) is a leading independent German manufacturer of cars and motorcycles. BMW was formed in 1913 after the merger of two small aero engine makers, Karl Rapp and Gustavo Otto. However, it was three other men (Josef Popp, Max Friz and Camillo Castiglioni) that made the company public in 1922 to form BMW AG. BMW is also the parent company of world-renowned cars, MINI and Rolls Royce. BMW is renowned for its sporty, sophisticated & luxury image which has been built up since the 1970's with many motor sport victories ranging from Touring Car to Formula 1. The products produced by BMW are prestigious, high performance, technologically advanced automobiles. These start from mid-range cars up to the most prestigious and luxurious. The present models are: ? BMW 3 Series - Saloon, Coupe, Convertible, Touring, Compact ? BMW 5 Series - Saloon, Touring ? BMW 7 Series - Saloon ? BMW Z3 - Roadster ? BMW Z4 - Roadster ? ...read more.

Quality circles - they work together to resolve any issues or problems within the workforce Virtual teams - they communicate on behalf of the workforce through the Internet. Before they had self-managing teams, BMW have a system that was very rigid and less opinionated. The case study tells us that this caused "disputes that seemed to occur every week" and "workers viewed themselves apart from the management". It also tells us in the case study that it caused discontent, which created "misunderstanding, communication problems, poor productivity and a reluctance to change". The workers at BMW also worked under a hierarchical system. As the case study tells us, BMW worked under a "traditional 'production line format'", where they had to take orders on what needed to be done and did not have a chance to express their thoughts on certain issues. Now, they have revolutionised the workforce and changed the programme "to a team based approach" where "cell production has replaced the production line and the emphasis at Cowley is based on self managing teams". The use of teams in BMW is very efficient and helps to achieve strategic aims and objectives. ...read more.

To deal with complex tasks - there are always going to be difficult tasks ahead when working in a team. Difficult tasks arise but if a team works on it together, a complex task can be broken down into a much easier task where everyone can cope with parts of the task delegated to them with effect. The case study tells us that by dealing with complex tasks, the workers in BMW are now perceived as "less divided and more cohesive". By dealing with complex tasks, they are meeting the strategic aims of following a clear strategy and recognising where their strengths lie. More ideas - ideas tend to come forth once people work together. If there are more ideas within a team, they are put into effect and eventually, end up in more productivity. More ideas bring more opinions. The case study tells us that BMW "has put into practice over 8000 ideas from its staff, saved �6.3million over the past year as a result and seen production targets exceeded by nearly two thirds". So if ideas are brought forward, it allows teams to figure out a way to save money and meet targets. By doing this, they are meeting the strategic aim of identifying potential and encouraging growth. ?? ?? ?? ?? Michael Osodi Unit 22: Managing Teams 1 ...read more.