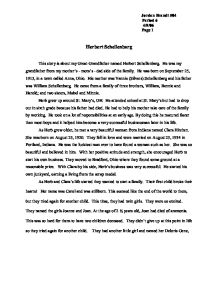 This story is about my Great-Grandfather named Herbert Schellenbarg. He was my grandfather from my mother's - mom's - dad side of the family. He was born on September 25, 1913, in a town called Anna, Ohio

Jordan Brandt #04 Period 6 4/9/06 Page 1 Herbert Schellenbarg This story is about my Great-Grandfather named Herbert Schellenbarg. He was my grandfather from my mother's - mom's - dad side of the family. He was born on September 25, 1913, in a town called Anna, Ohio. His mother was Vannie (Silvers) Schellenbarg and his father was William Schellenbarg. He came from a family of three brothers, William, Bennie and Harold; and two sisters, Mabel and Minnie. Herb grew up around St. Mary's, OH. He attended school at St. Mary's but had to drop out in sixth grade because his father had died. He had to help his mother take care of the family by working. He took on a lot of responsibilities at an early age. By doing this he matured faster than most boys and it helped him become a very successful businessman later in his life. As Herb grew older, he met a very beautiful woman from Indiana named Clara Hitchen. She was born on August 23, 1920. They fell in love and were married on August 23, 1934 in Portland, Indiana. He was the luckiest man ever to have found a woman such as her. She was so beautiful and believed in him. ...read more.

He enjoyed helping others. He volunteered to help form St. Mary's Lake. He helped by digging out the area. Herb spent many hours and days helping to form this lake. He was also known for helping to build the Round House at Bradford for the railroaders to stay in. Herb helped the community in so many different ways, he was well known by everyone. He started his own business by owning a scrap yard. His business was called Schellenbarg Scrap Yard. He had contracts with the government to furnish them with metal for the war to make guns and other things during World War II. Metal back then was scarce. Herb didn't serve any time in the military service; he was needed to supply metal instead. He had been in the junkyard business for 27 years. He was a hard worker and really enjoyed his work. Jobs were hard to find in the 1900's. There were people that would come to his place begging for a job. Some of these people were homeless and they didn't have a place to live. Great- Page 3 Grandpa would let them stay with them until they could find a place to live. This was how my great-grandparents were. ...read more.

It happened too quickly. It was a disaster! The page 4 family had a terrible time accepting this tragic death. People came from all over for his services. He was a well-known man. I feel very proud to have a Great-Grandfather such as Herb A. Schellenbarg. He was a hard working businessman and a man who knew how to take care of his family. Family meant everything to him. He cared a lot about his community and always volunteered to help in any way he could. His heart was so huge that it reached out to many. He was well known by everyone and everyone cared about him. The more I learn about him, the more I want to be just like him. Someday I will own my own business and be very successful just as he was. Family would mean the world to me also. I would take pride in my life and help others as much as I could. Even though my Great-Grandfather, Herbert Schellenbarg, isn't with us today, he will always be remembered. I am very proud of my Great-Grandfather for everything he has done in his life. Sources of and dates of information: Pictures of the business fire from a camera my Great Grandfather Copy of Marriage License Memory paper of Herbert Schellenbarg when he past away Newspaper clippings dated July 30, 1965 of tragic boom accident in the Piqua Daily Call ...read more.