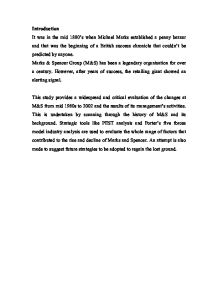 This study provides a widespread and critical evaluation of the changes at M&amp;S from mid 1980s to 2002 and the results of its managements activities. This is undertaken by scanning through the history of M&amp;S and its background. Strategic tools like PES

Introduction It was in the mid 1880's when Michael Marks established a penny bazaar and that was the beginning of a British success chronicle that couldn't be predicted by anyone. Marks & Spencer Group (M&S) has been a legendary organisation for over a century. However, after years of success, the retailing giant showed an alerting signal. This study provides a widespread and critical evaluation of the changes at M&S from mid 1980s to 2002 and the results of its management's activities. This is undertaken by scanning through the history of M&S and its background. Strategic tools like PEST analysis and Porter's five forces model industry analysis are used to evaluate the whole range of factors that contributed to the rise and decline of Marks and Spencer. An attempt is also made to suggest future strategies to be adopted to regain the lost ground. M&S Background The company was started in Leeds in 1884 by Michael Marks, a Russian immigrant. Ten years later, Tom Spencer joined partnership with Marks and M&S was born. Their partnership had all the components of success, uniting entrepreneurial flair with the commercial expertise required to create a string of 'Penny Bazaars'. ...read more.

Even though recessionary trends are speculated about its drastic effects are not yet detectably seen in the economy. Of course the economy show signs of weakening. The underlying rate of inflation was 2.3% for March 2002. The Bank of England is attempting to keep inflation below 2.5% and hopes to prevent a rise in interest rates. A rise in interest rates will complicate any financing decisions and may delay any long-term investments as it will increase the cost of debt as such alternative forms of investment such as equity become a more desirable form of investment though historically equity finance is rarely used for financing long term objectives due to the fact that it can be very costly and will weaken shareholder control. For the past two years the prediction of an impending downturn has emerged large though this has not happened. Many economists predict an forthcoming recession. If that prediction is proved correct, history dictates that, in times of recession, consumers will be more price sensitive and less likely to purchase high priced goods due to a lack of disposable income. ...read more.

Competitive Advantage M & S could attain competitive advantage by developing and implementing these distinctive resources capabilities and competences. The strategies adopted after the great fall of 1998 enabled M & S to regain its lost territory. The competitive advantage of M & S can be explained in terms of its reputation for quality, its special relationships with its suppliers and its customers. M & S has a very exacting but mutually profitable relationship with the suppliers. It demands high quality at reasonable cost and flexibility in return for large volume of business. Its relationship with the customers is based upon its reputation for good service, refunds, exchange of goods and high quality value for money goods. Real competitive advantages take longer to build and last longer. M & S has the best brands on high street. The customer associates with the company with dependability and value for money. The employees are always a privileged lot resulting in their high involvement and commitment. At the end result it has a performance that is superior to most of its high street competitors. ...read more.